One-piece, no weld, seamless flight components help take spacecraft farther and faster than ever before. Discover how we helped one company build a custom MCC..

Spaceflight fans have a lot to cheer about these days. Sir Richard Branson flew his Virgin Galactic rocket-powered plane to the edge of space and back. There was the NS-18 flight by Jeff Bezos’ Blue Origin that took William Shatner, a.k.a. Captain Kirk, to space. And let’s not forget the SpaceX deployment of 51 broadband satellites, an event preceded a few years earlier by Tesla founder Elon Musk’s inexplicable decision to launch one of his sports cars on a galactic road trip.

These are just a few of the projects undertaken by notable billionaires over the past few years, bold moves that were in large part made possible by decades of government-funded spaceflight. That funding continues, and between these and the dozens, perhaps hundreds of journeys yet to come over the next decade, it seems that space has at long last become the final frontier we’ve always hoped for.

Space flight takes robust hardware. Most visible of all are the glowing hot nozzles spouting jets of flame many dozens of feet long. Atop these sit tanks containing tens or even hundreds of thousands of gallons of rocket fuel, highly corrosive liquid that is then pumped into a combustion chamber able to reach temperatures of nearly 6,000 °F (3,200 °C). Were it not for their advanced cooling systems, these chambers would actually exceed the melting point of their metal components, destroying the ship along with its precious cargo. It’s serious business, and it needs serious parts.

Fortunately, we’ve stepped up to the spaceflight challenge. With high performance components that were either impractical, or downright impossible to produce just decades ago. We are a leading manufacturer in this area. Advanced Structural Technologies Inc. (AST) operates out of Oxnard, California. We started off as a supplier of aftermarket forged aluminum wheels in 1998. We now have over 150,000 sq. ft. of manufacturing space and over 165 employees, and in the last 10 years have expanded into the aerospace, military, and alternative energy markets. 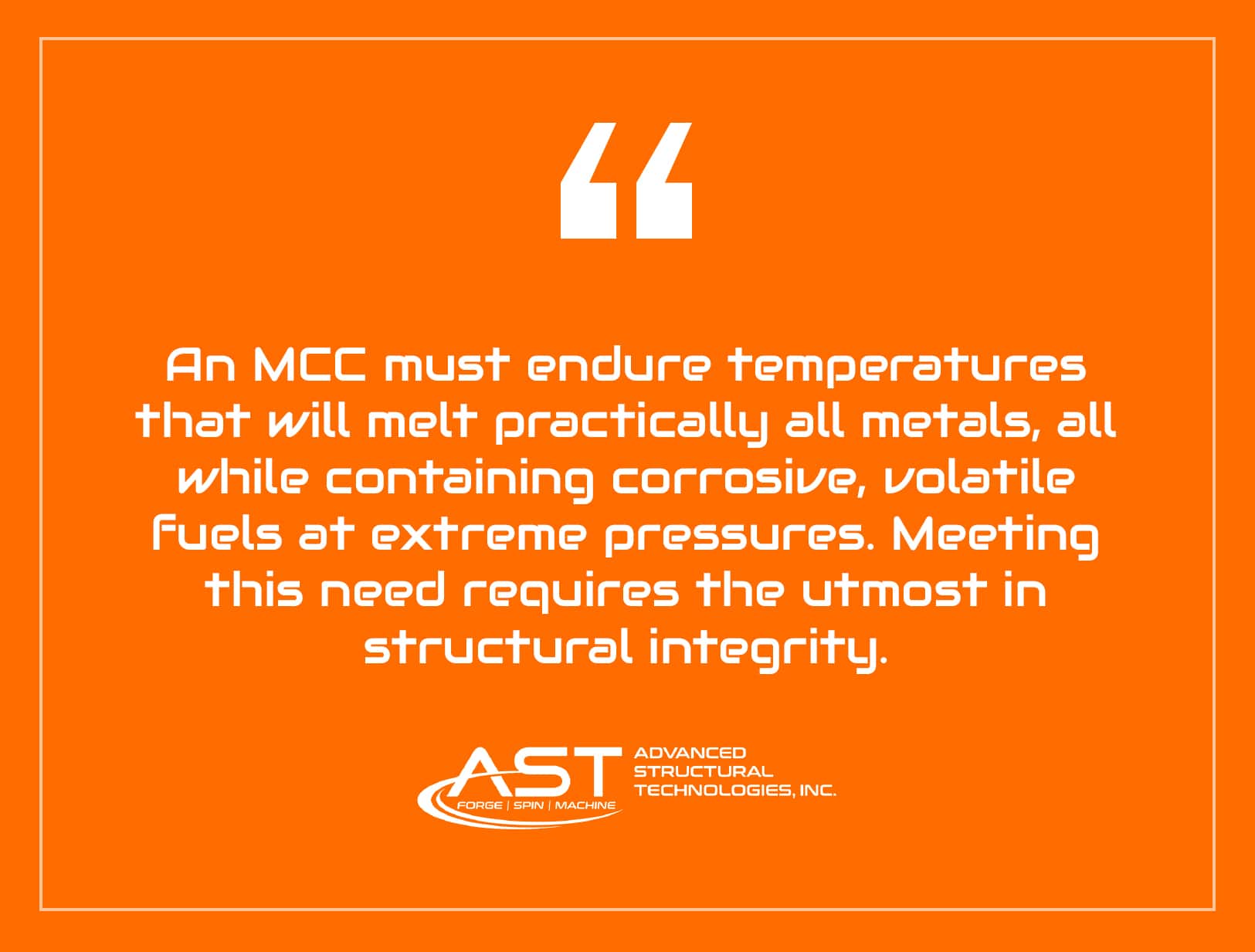 One of our customers challenged us with the construction of an MCC (main combustion chamber). The well-known national space manufacturer’s cryogenic booster engine design emphasizes high reliability and reduced cost. As mentioned, however, an MCC must endure temperatures that will melt practically all metals, all while containing corrosive, volatile fuels at extreme pressures. Meeting this need requires the utmost in structural integrity. 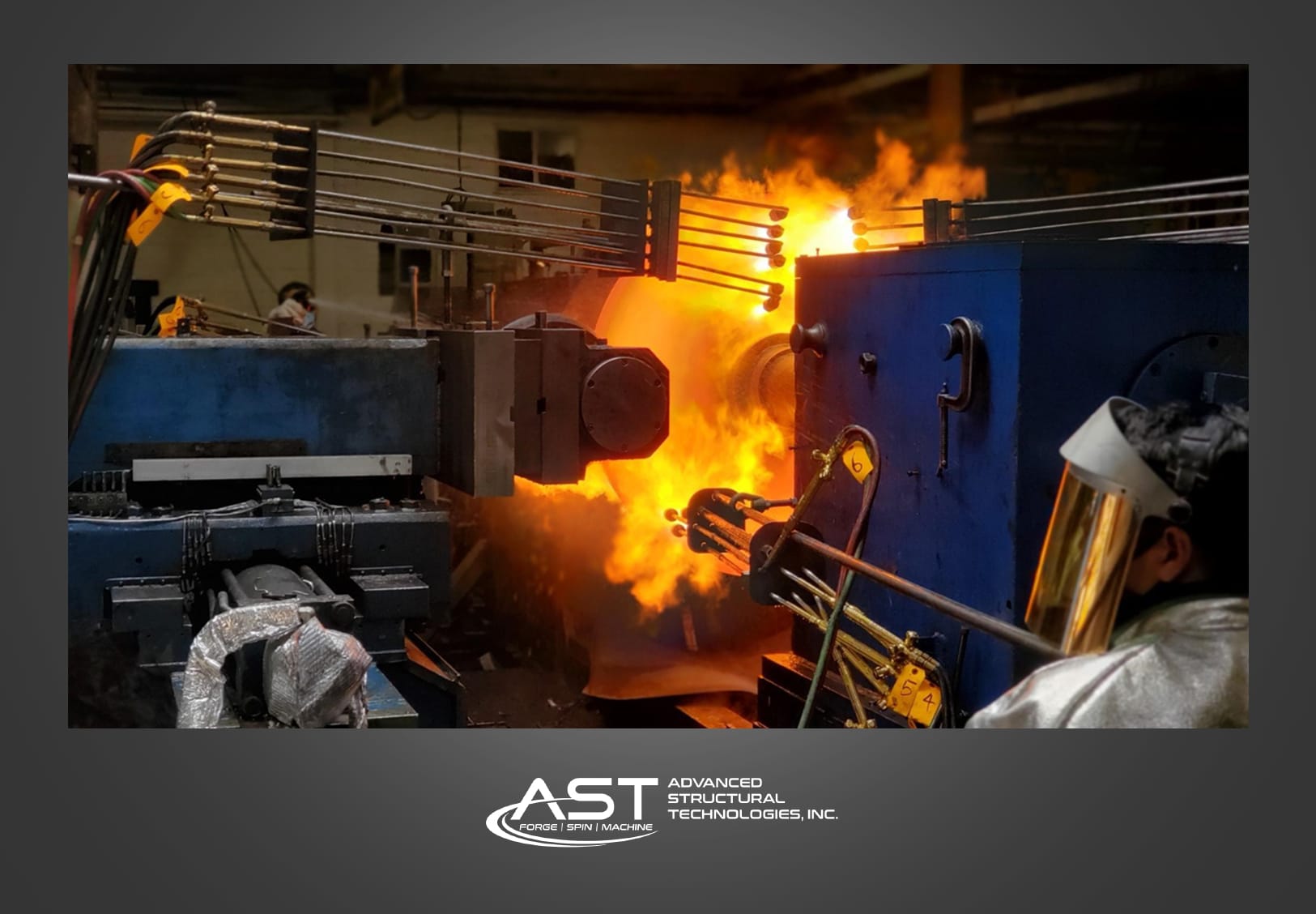 Building A Custom MCC Chamber For Spaceflight [Our Solution]

To accomplish these various demands, this particular MCC is built of upper and lower parts that utilize a channel wall configuration and specialty copper alloy liner, both of which are then intermediately cooled with hydrogen. AST sourced the forged copper blank used to make the chamber liner from Tokyo-based Mitsubishi Materials Corporation. 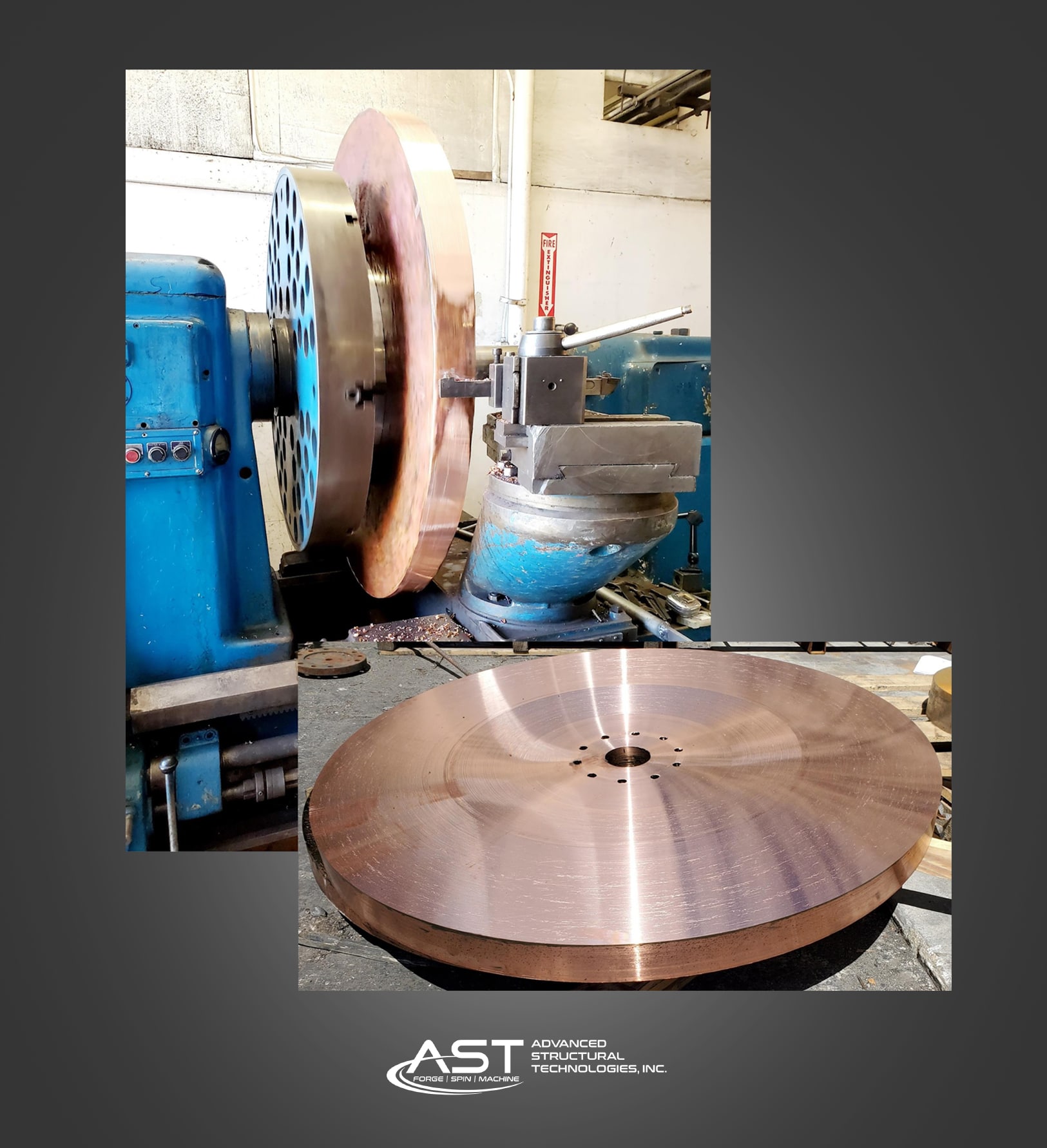 We then mounted the kitchen table-sized disk onto one of our many computer-controlled spin forming machines and proceeded to coax the metal into a conical shape, progressively expanding it to more than four feet in diameter and nearly three feet in length.

That’s when the challenging part began. Because the customer wanted a single-piece design with no welds or joints that might fail under the MCC’s intense operating parameters, AST was tasked with elongating the cone shape to create an integrated chamber at one end. For this, we used an even larger piece of equipment—a newly rebuilt Kieserling hot spinning machine that was essential to completing a part of this size and complexity. 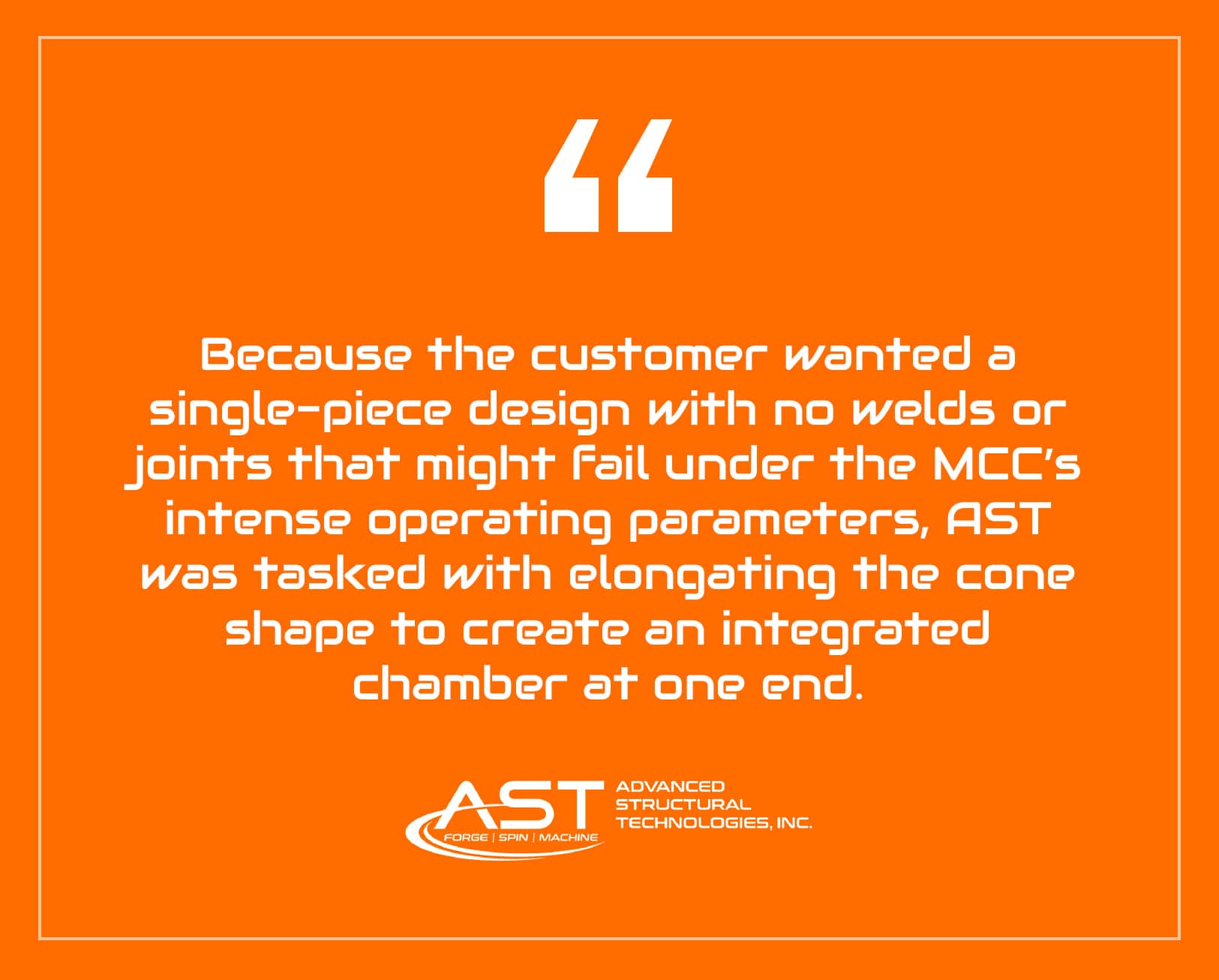 Using specialty tooling that includes a spring-loaded ring and roller housing with recirculating cooling capabilities, our team was successful. The part’s third and nearly final manufacturing phase brought it to 45″ in diameter by 60″ in length, dimensions that we verified on one of our FaroArm laser-scanning portable CMMs (coordinate measuring machines). All that remained was to turn the MCC liner to its finished deliverable size, an operation that we also accomplished successfully.

Space And Beyond – Our Other Capabilities

There’s much more to this story, and to the needs of the aerospace community. AST is capable of manufacturing a large variety of spaceflight components, among them domes, tubes, dishes, and different nozzle and chamber configurations. 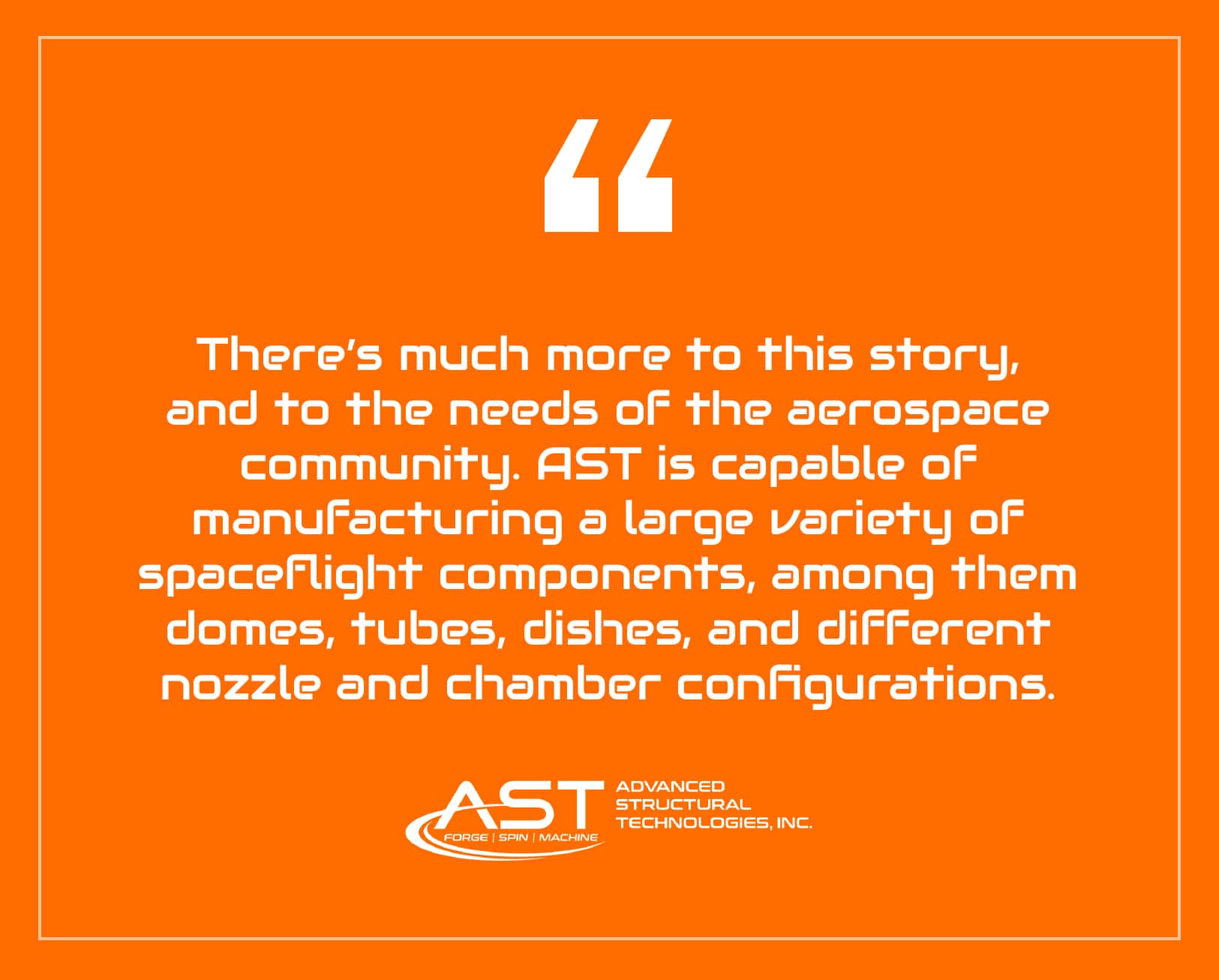 Aside from the spin and roll forming just discussed, the company specializes in high-pressure hydrogen storage tanks. Many of these are wrapped in carbon fiber composite material and boast one-piece aluminum liners (Type 3 COPV), making them suitable for space and cryogenic applications. 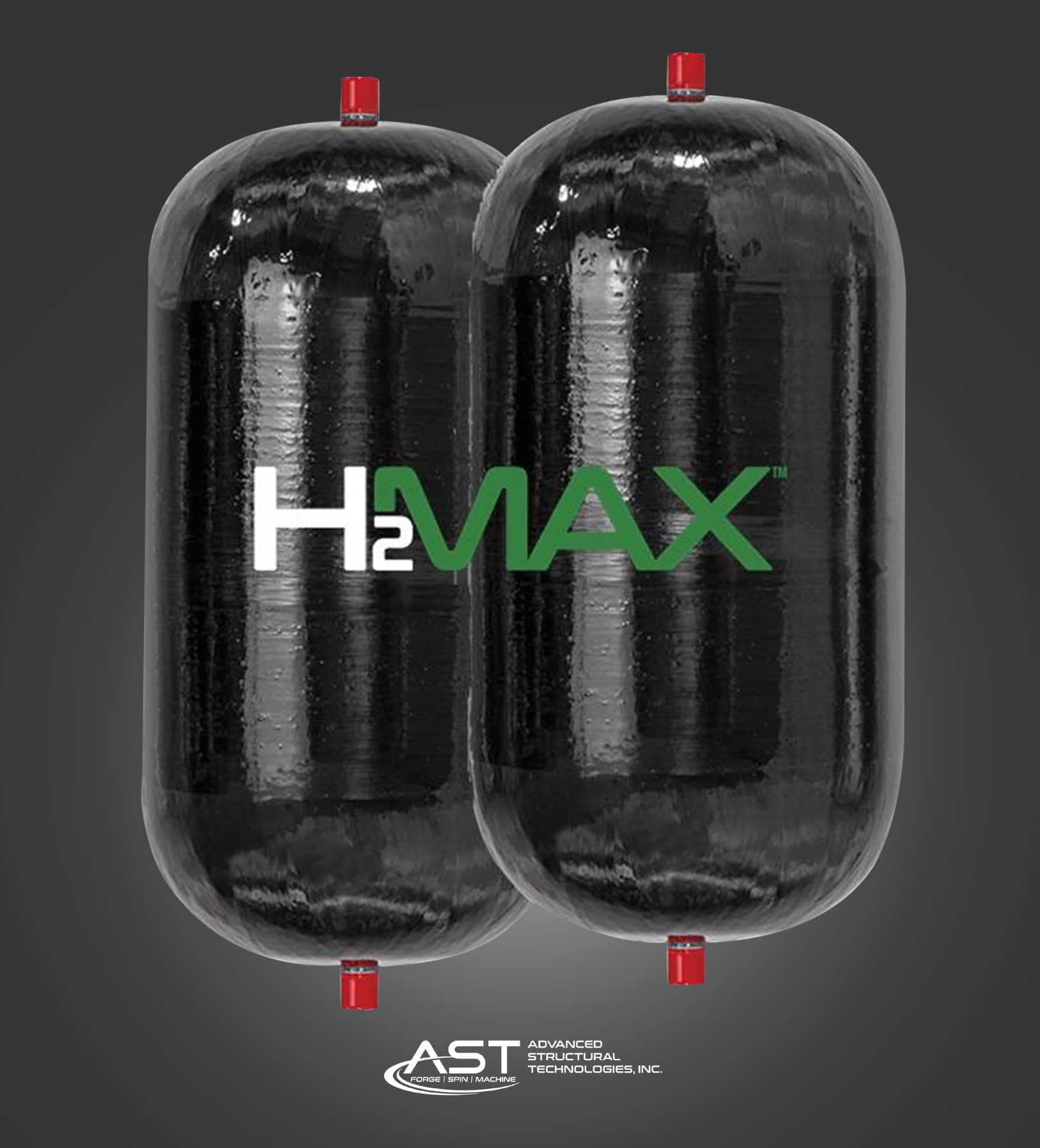 Closer to home, AST has also expanded on its wheel production business by moving into the military market, producing more than 40,000 forged aluminum wheels for the M1 Abrams and other U.S. battle tanks, as well as high-performance wheels for the racing and off-road vehicle industries. Despite this success, however, it’s the promise of additional spaceflight engagement that has the people at AST most excited.

“AST’s capabilities really lend themselves to the space race that’s continuing to ramp up thanks to the likes of Elon Musk and Jeff Bezos, and renewed interest from some of the national space agencies,” says director of aerospace sales management, Doug Jones. “We have the moon coming up, there’s Mars, and it looks now like China’s planning on a huge space station. It’s definitely an exciting time, and we plan to be a big part of it.” 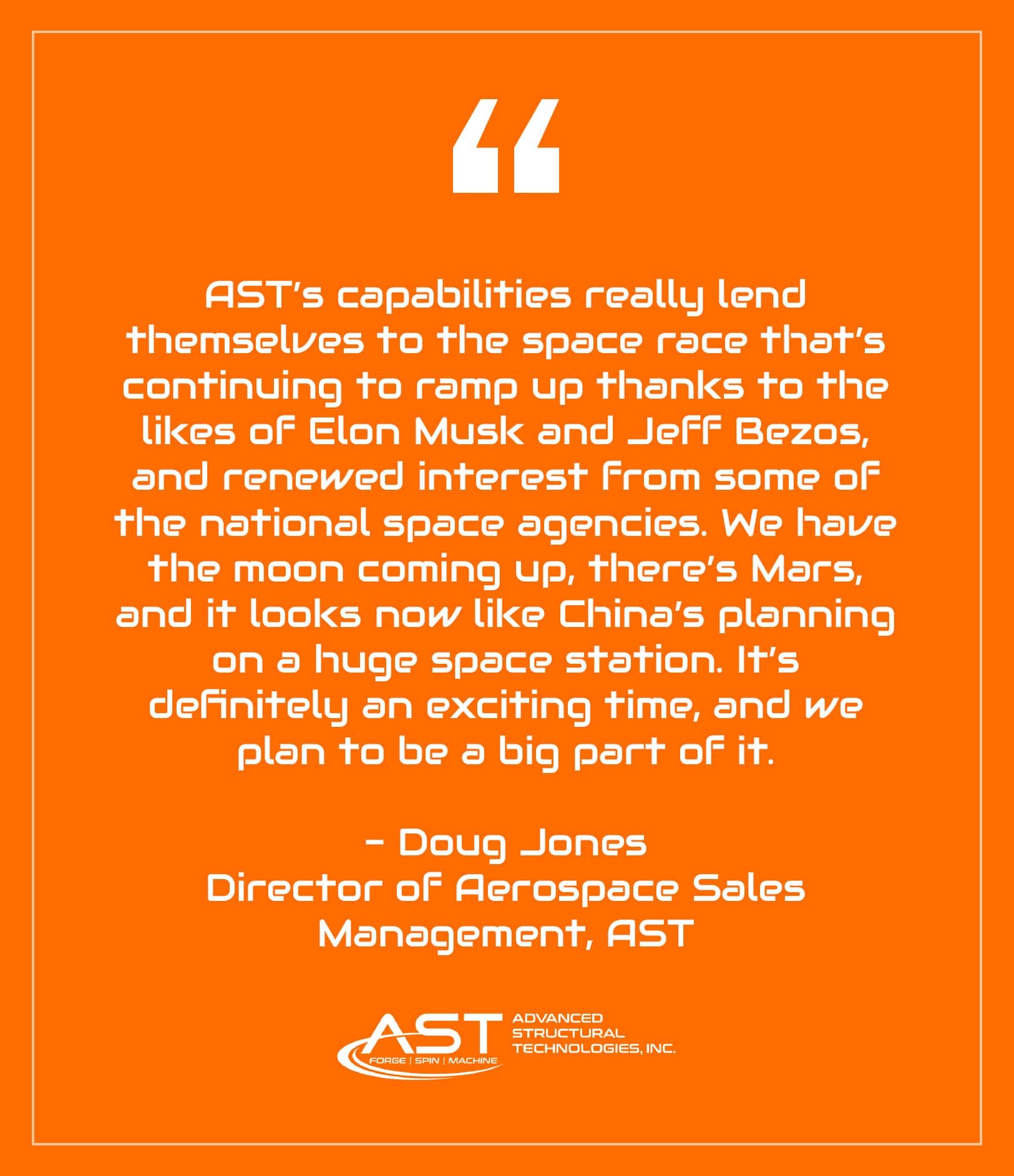 Looking for an Aerospace Components Manufacturer?

If you’re currently in need of metal working for aerospace components, let’s talk about your options. It’s worth taking the time to discover what advantage you’ll have with AST, Inc. and how we can help you meet your goals. 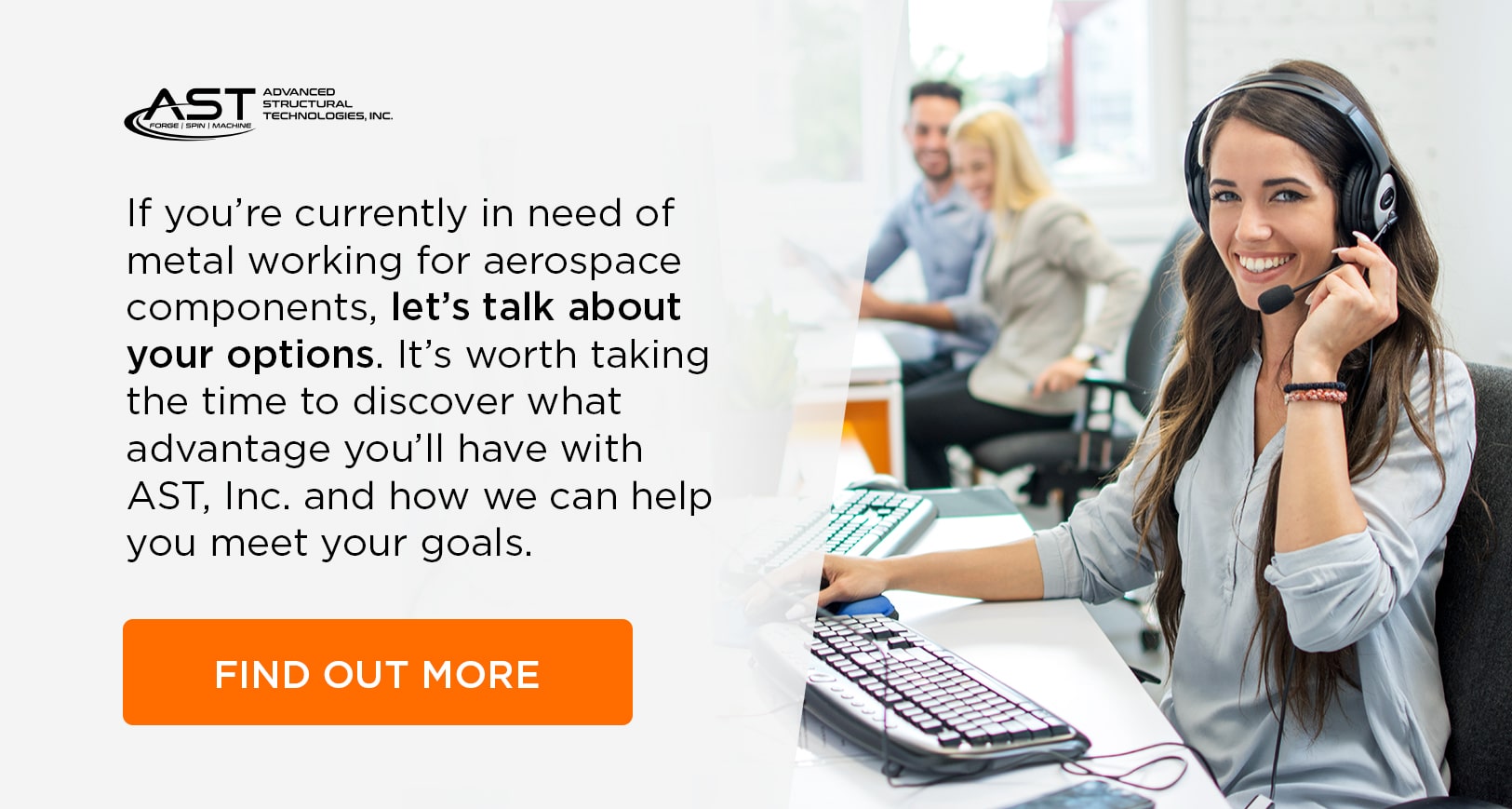