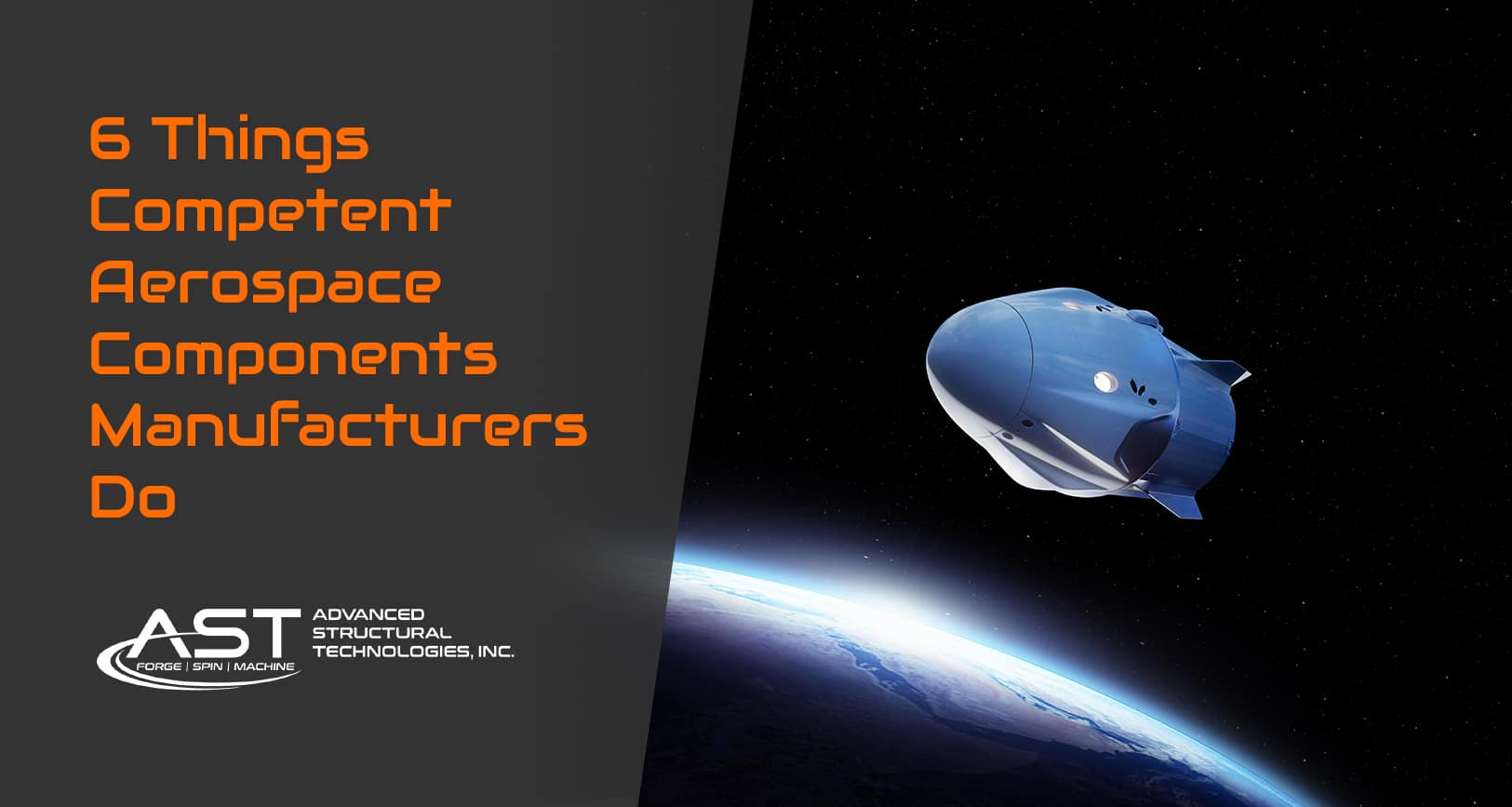 Finding an aerospace manufacturing company to work with can be a daunting prospect. The stakes are incredibly high for companies looking for an aerospace vendor, considering the costs of such components and the critical importance of quality and safety, not to mention the kinds of considerations relevant to customers in any industry: customer service, order turnaround time, etc.

The aerospace components industry is big business, and companies compete aggressively to capture market share. The global aerospace parts manufacturing market size was estimated at over $750 billion in 2021. That number is expected to grow to $1.13 trillion by 2030. And that market is by no means static. As companies compete to produce better, lighter, stronger, and cheaper components, companies that stand still are sure to get left in the dust.

People’s minds often jump to high-tech spacecraft when they think of the aerospace industry; and while that segment is important, it’s generally airline travel that has been driving the strong growth in the overall industry. “With emerging economies like India, China, and European countries, frequent flyers have increased,” according to Straights Research. Reasons may be varied, encompassing both personal and business pursuits, but passenger counts have increased. In addition, they say, “the per-capita income in such countries has risen to the highest level considering their past income, so people are now traveling by flights more than any other travel means, even for domestic travel purposes.”

As a result, the aviation industry is facing strong competition for the lucrative civilian travel market. To stand out from the competition in meaningful ways, the aviation industry looks for opportunities to introduce new designs and larger aircraft. “This is why many manufacturers, OEMs, Tier-1&2 companies are stepping into the aerospace parts manufacturing market to gain maximum profits and have a significant revenue generation through this,” according to Straights Research.

When companies are looking to source aerospace components, they don’t expect to walk into a retail store and pick something up off the shelf. There is a wide range of components suitable for a variety of applications—from drones to airplanes to spacecraft, and buyers are often looking for custom components unique to their own specific application. The highly specialized nature of the market and the relatively small number of players means that it’s not practical for the aerospace components industry to have a massive inventory of off-the-shelf components. 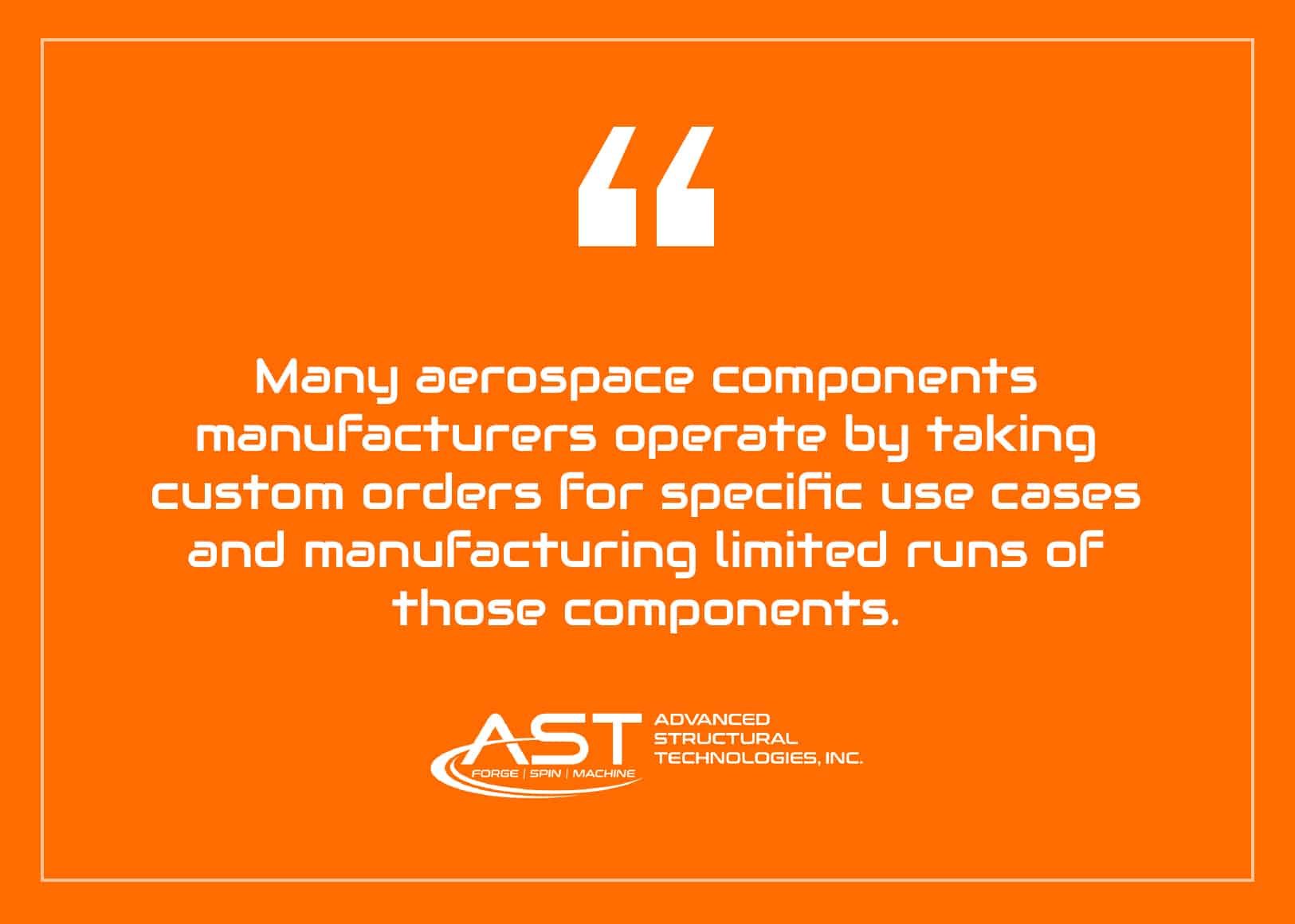 While many manufacturers may well be served by extremely intelligent engineers, that’s not enough by itself to get the job done. A solid custom component manufacturer should have strong R&D capabilities and knowledge of a broad range of applications and technical processes for quality and efficient manufacturing. This allows such manufacturers to be competitive on cost while ensuring high quality and safety.

Beyond safety, durable parts reduce the cost of buying replacement parts and servicing aircraft, which can make airlines and airplane manufacturers more competitive on price. 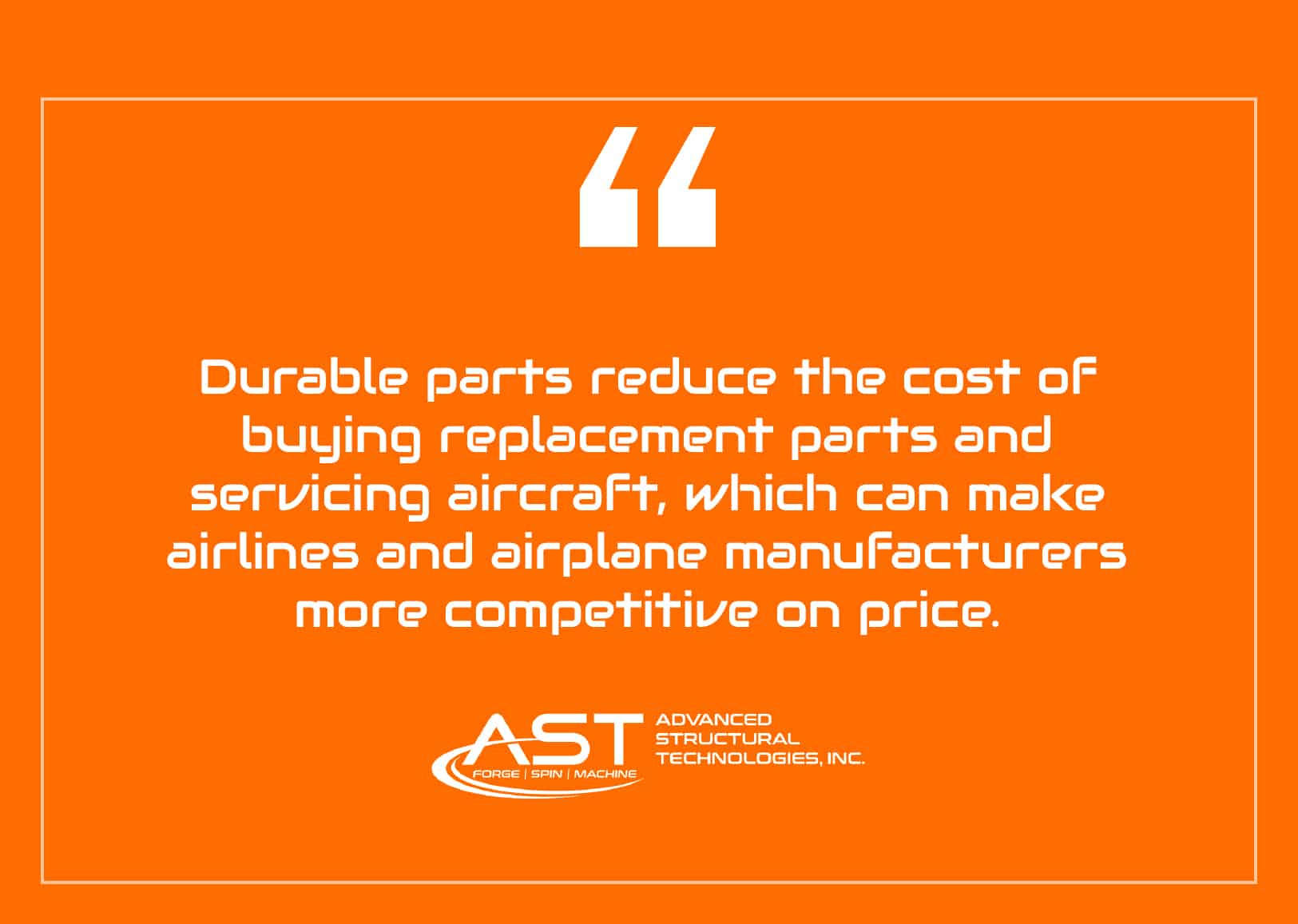 One of the most common materials used in the manufacture of aerospace components is aluminum. For those whose primary and most regular exposure to aluminum comes through foil from the kitchen or pop cans, aluminum might seem like a flimsy choice compared to, say, steel. Steel is certainly used in many aerospace components; however, aluminum has some great qualities. It’s got a very high strength-to-weight ratio, high ductility, and high resistance to corrosion.

Aluminum can be extremely durable and certainly suitably durable enough for use in aircraft and even spacecraft. Exactly how durable depends on the specific grade. There are literally hundreds of different aluminum alloys in existence; however, there are about five that dominate the aerospace industry:

The amount and type of other metals in these alloys (such as copper or magnesium) will impact how durable they are as well as how well they can be molded, machined, heat-treated and otherwise manipulated during the manufacturing process.

The technique used to manufacture aerospace parts also impacts the durability of those parts. One piece aerospace components are stronger than multi-piece, because there are less welds and joints; which are often the weak point. AST specialize in one piece components, here’s a case study on how we produced A One-Piece Rocket Combustion Chamber For the 2022 Space Race.

III. Use The Right Materials 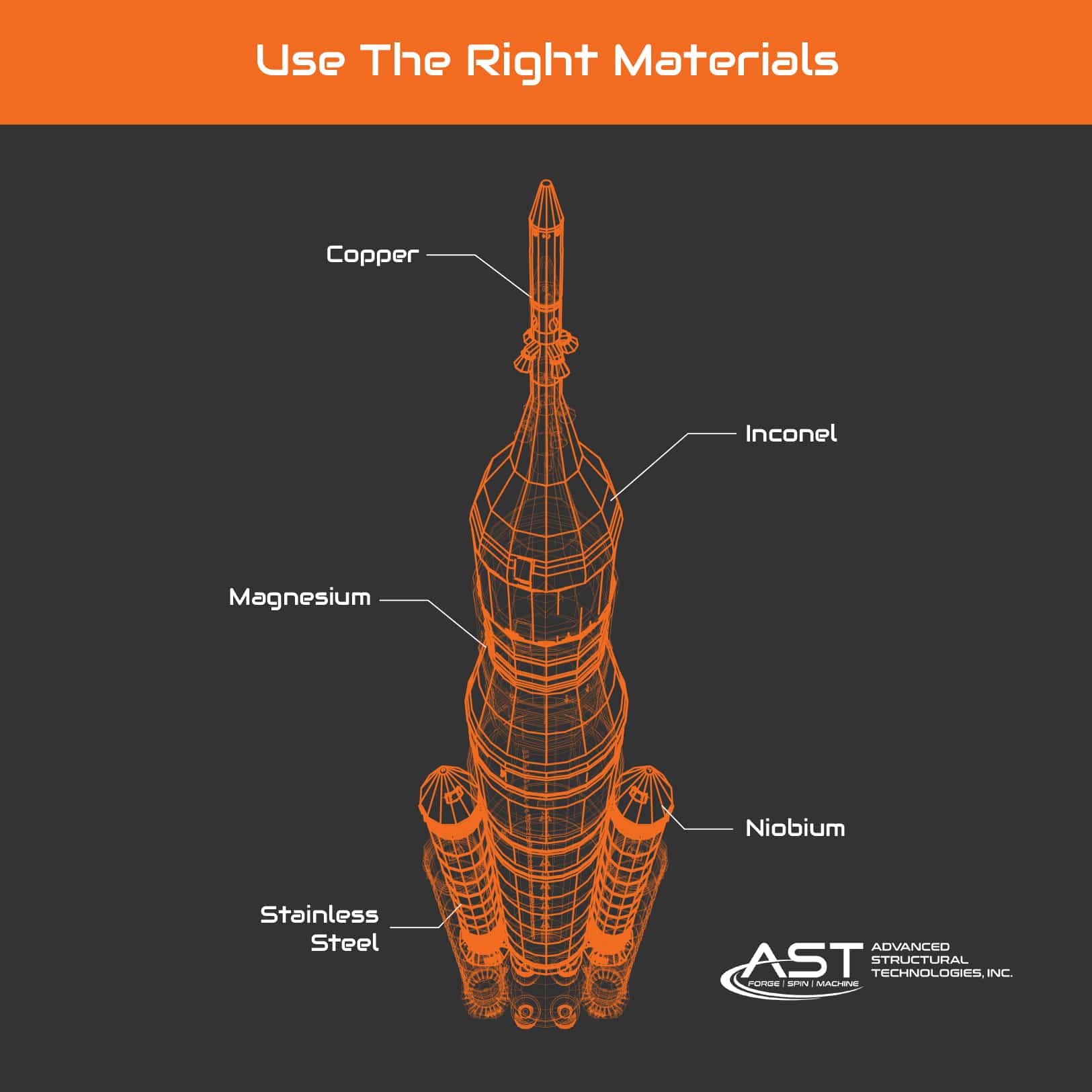 Using the right components is a fundamentally important aspect of any manufacturing process, and that’s particularly true in the aerospace industry. We’ve already talked about the extensive use of aluminum in this space, but there are a number of other metals that are also crucial to the industry.

Companies that boast their own in-house engineering capabilities cut out middlemen that can slow down the development process. Those with highly flexible operations can quickly shift gears to manufacture new and different products as customer demands change. And short development cycle times mean companies can design, develop, test, and roll out new components more quickly. Companies like AST that boast all of these benefits are able to offer their customers fast, quality production even when faced with highly dynamic demands.

A key technique AST leverages in its industry-leading aerospace manufacturing operations is net near shape, which means that the initial production of a given component results in something very close to the intended final shape and format. For example, instead of pressing a piece of aluminum into a flat rectangle that is subsequently sawed into the shape of a propeller, the manufacturer could start out by pressing the aluminum into something close to the shape of the end-product propeller.

Net near shape results in reduced overall machining time as well as less material waste, because there are fewer steps in the process. Additionally, fewer steps means fewer opportunities for errors in the production process. 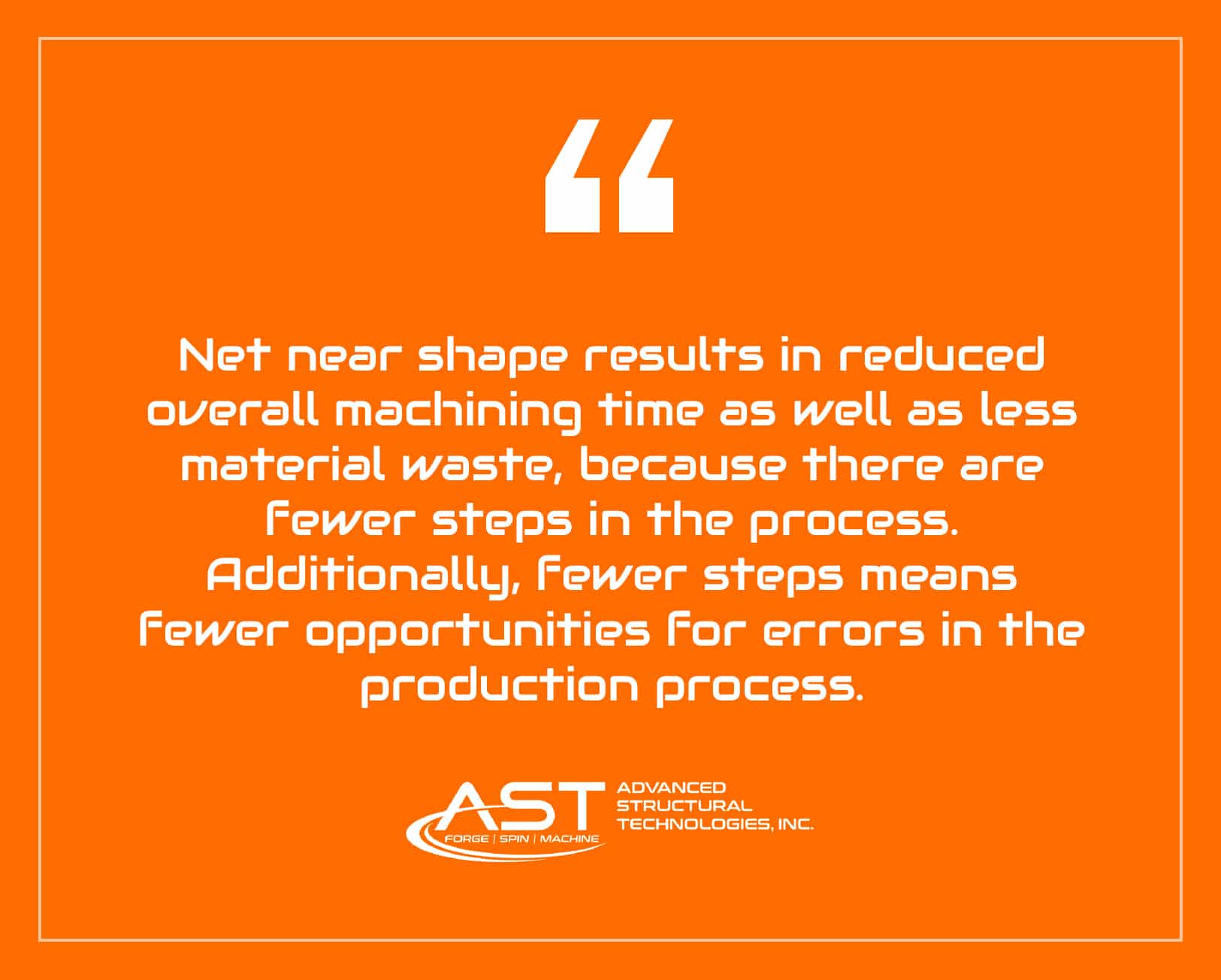 Companies that use such techniques and achieve a highly streamlined manufacturing process benefit their customers by keeping costs and errors low.

Streamlined processes are one part of the engineering element of aerospace components manufacturing. The other key part of the engineering element is the design of the components themselves. Components that are well and innovatively designed benefit end customers by providing for better system performance, because precise, high-quality components operate well together to create a sound overall machine. Consider the expression, “a chain is only as strong as its weakest link.” 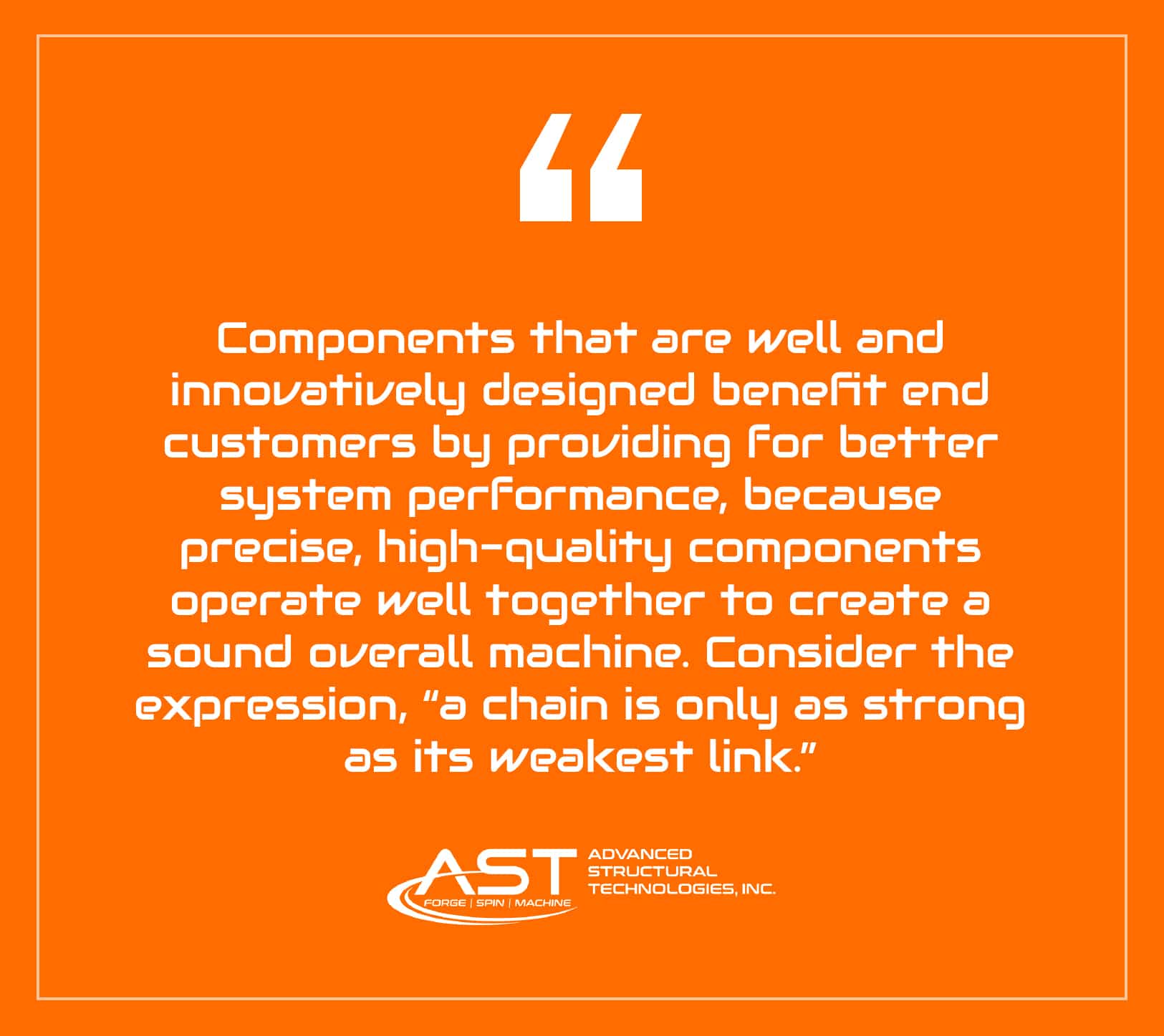 Innovatively designed products also allow for simplified assembly for customers. If components allow downstream customers to more efficiently carry out their business, such components may result in cost savings overall, even if the components themselves may be slightly more expensive than inferior alternatives.

The global aerospace components industry is expected to be worth well over one trillion dollars by the end of the decade, with growth largely driven by increased demand for air travel. This means there is a massive pie available for companies adept enough at their trade to seize a piece of it. Competent aerospace parts manufacturers know how to select the right materials and implement innovative component and process designs to produce durable products efficiently and in quick response to ever-changing customer demands.

AST is a global leader in aerospace components manufacturing. Contact us today to see how our best-in-class manufacturing processes and designs can help your company separate itself from the competition. 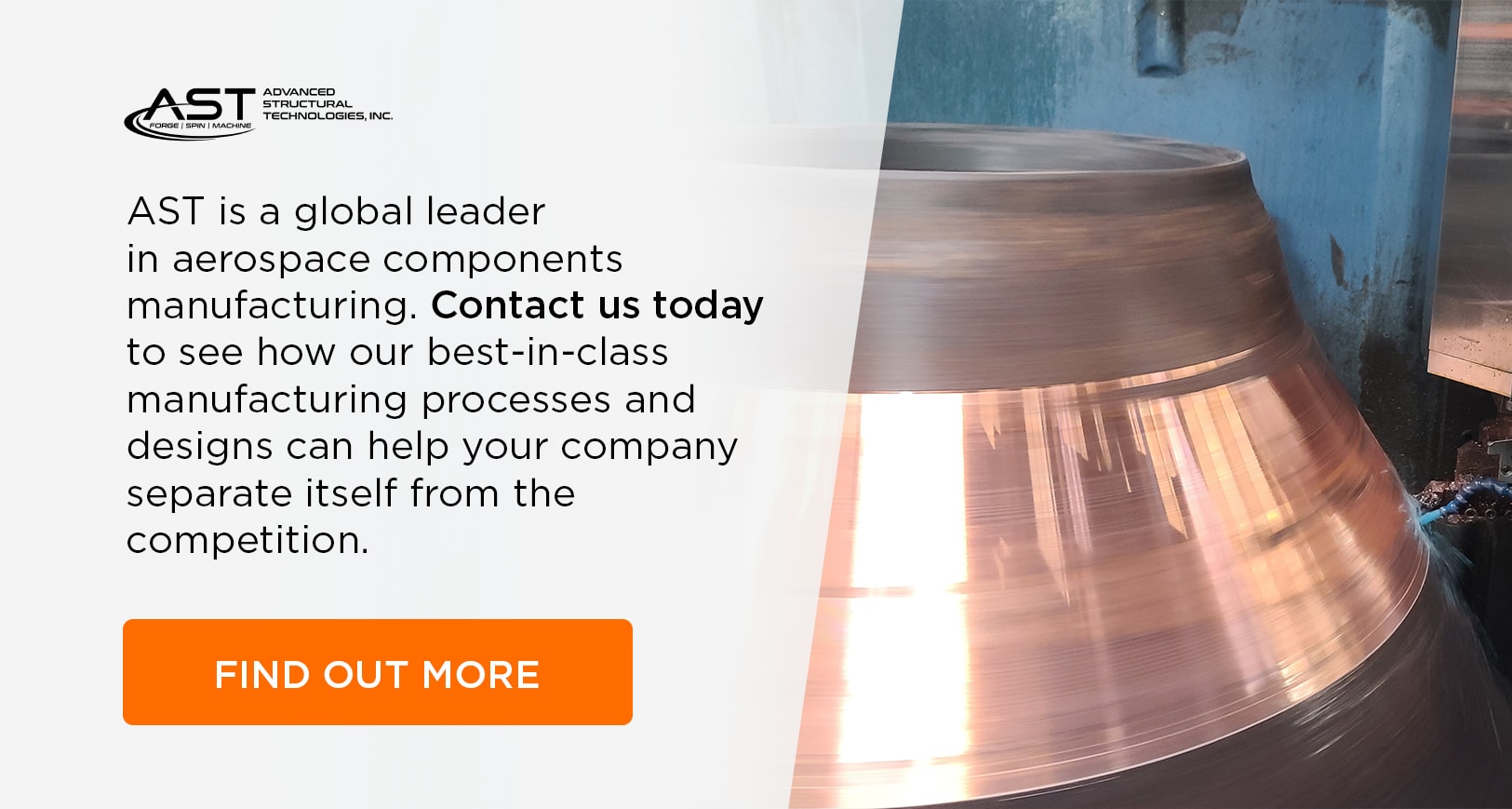