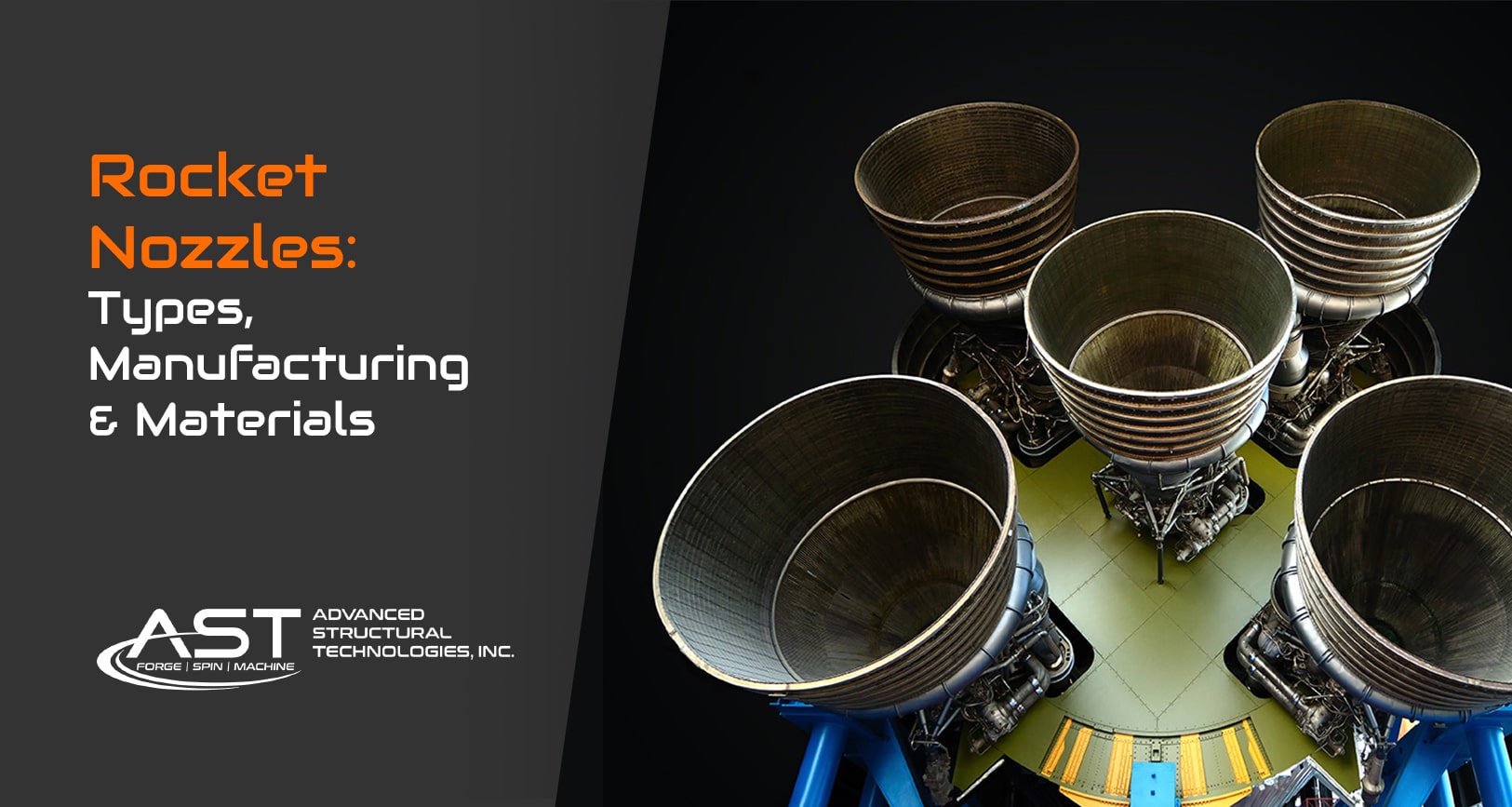 A nozzle is a relatively simple device conceptually—a hollow structure with no moving parts that funnels liquids or gasses from one end of the nozzle to the other. The various cross-sectional shapes and dimensions within the nozzle are designed to manipulate the pressure, flow rate, volume, and speed of the liquid or gas flowing through them. So, while a nozzle is rather simple in concept, the actual design of a nozzle used in the aerospace industry is often highly complex, requiring precision design, measurement, and manufacturing techniques.

Poorly designed or manufactured nozzles can create significant problems for the jets and spacecraft that use them, ranging from reduced fuel efficiency to potentially catastrophic damage to the nozzle and the associated aircraft or spacecraft.

In this post, we’ll look at how nozzles work to increase thrust as well as different types of nozzles and how they’re used in the aerospace industry.

How much do rocket nozzles increase thrust?

A rocket nozzle takes a combustible liquid or gas and transforms the chemical energy of that fuel into kinetic energy used for propulsion. A typical nozzle takes a gas or liquid fuel and combusts it to create a steady flow of exhaust at a consistent speed and direction. 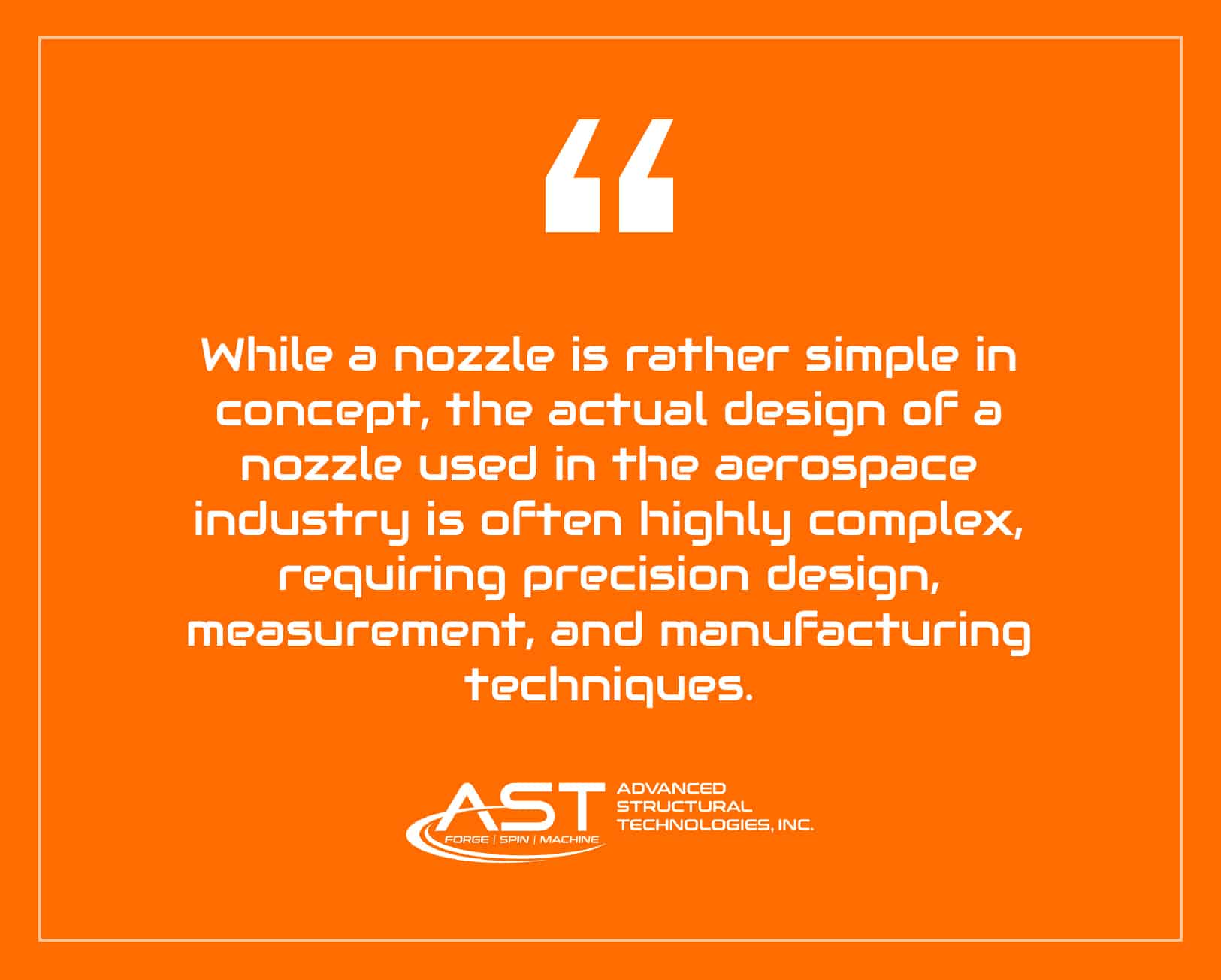 Rocket nozzles are fundamental to many aerospace applications, particularly space travel and commercial aviation. Rocket nozzles are the best available technology for propelling aerospace vehicles at the high speeds necessary to escape Earth’s gravity or to keep hundreds of people and a massive jet airplane airborne.

Perhaps the most common nozzle design is known as the de Laval nozzle, also referred to as the convergent-divergent nozzle; however, as discussed below, there are a variety of nozzle designs in use today. The convergent-divergent nozzle works by combusting a fuel in the front portion of the nozzle. That fuel is then forced through a small “throat” in the middle of the nozzle before being ejected (causing thrust) through the larger exit opening at the rear of the nozzle.

The ultimate goal of any rocket nozzle is to achieve parallel thrust (i.e., the thrust is exactly parallel to the direction the craft is traveling) at an exit pressure that equals the ambient pressure at the nozzle exit. 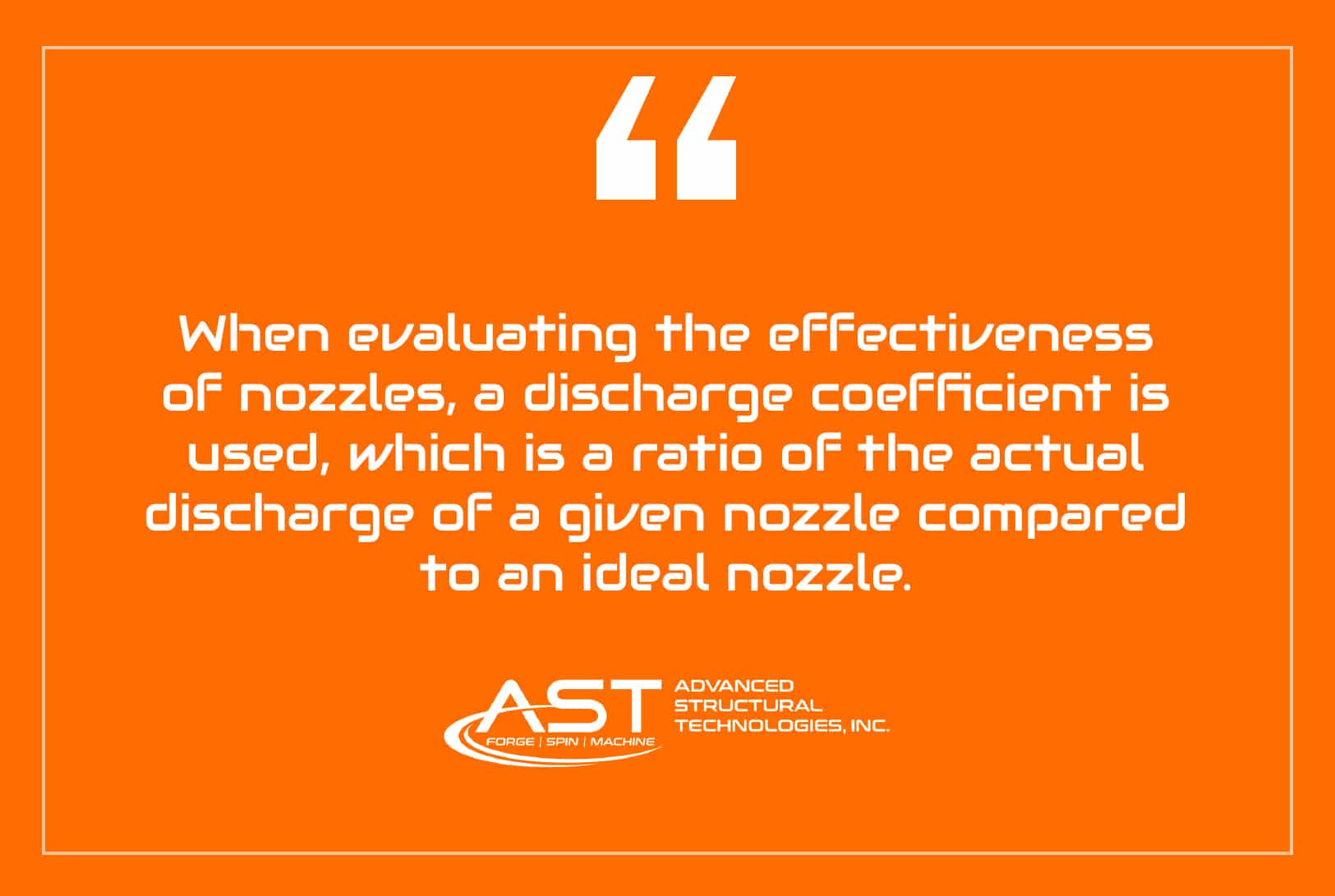 Achieving an ideal nozzle is somewhat of a theoretical proposition, in that the closer one gets to an ideal nozzle, the more difficult and costly it is to achieve marginal improvements. When evaluating the effectiveness of nozzles, a discharge coefficient is used, which is a ratio of the actual discharge of a given nozzle compared to an ideal nozzle.

The development of rocket nozzles was greatly advanced in the late 1800s by Swedish engineer Gustaf De Laval. His invention, referred to as a de Laval nozzle, is also referred to as a convergent-divergent nozzle.

Bell or contour nozzles are noted for their size and performance advantages over conical nozzles. These advantages are achieved by using two separate sections with different angles and contours, thereby allowing for reduced weight and improved performance.

The key factor in determining the efficiency of a rocket nozzle is the ratio between the narrowest part of the nozzle to the exit plane, where the exhaust exits the nozzle. The higher the ratio, the greater the efficiency, which—all else being equal—translates into greater thrust. 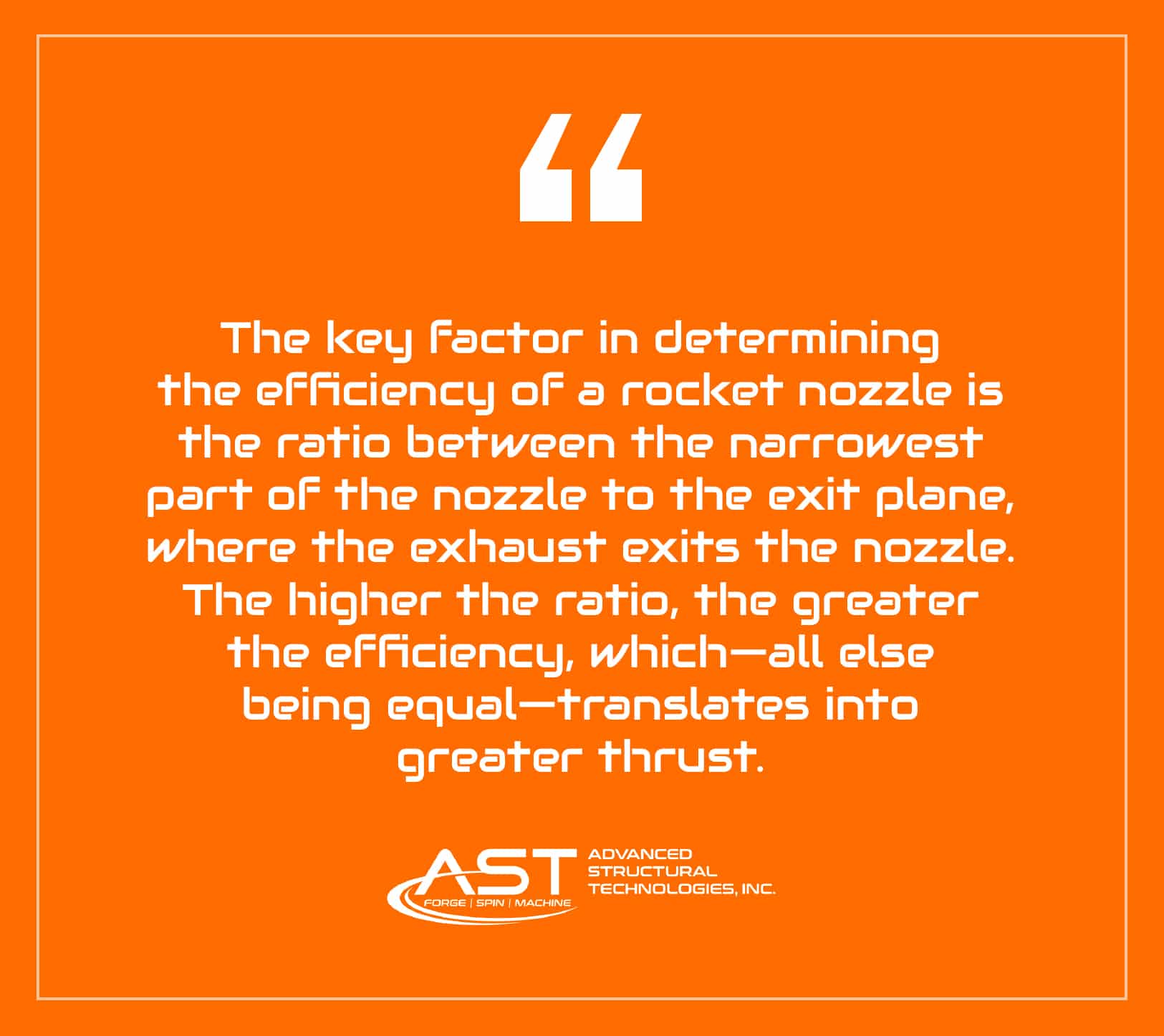 The angle of the cone also impacts the efficiency of the nozzle. The simplest nozzles have a cone half-angle of about 15 degrees, which provides about 98% efficiency. Marginally greater efficiencies can be reached with smaller angles, and as the angle increases, efficiency decreases.

Why are rocket nozzles bell shaped

Rocket nozzles get their characteristic bell shape due to the importance of the ratio of the smallest portion of the nozzle to the exit plane, as discussed above. The need to have a wide exit plane at the end of the nozzle, combined with the need for a narrower section through which exhaust is funneled, naturally lends itself to this iconic bell shape.

How do they keep rocket nozzles from melting

The temperature of the fuels combusted in rocket engines can reach as high as roughly 3,500 K, about half as hot as the surface of the sun, leading many casual observers wondering how such components are able to function without melting or otherwise being damaged.

Of course, rocket nozzles don’t typically melt, and there are several methods manufacturers use to manage the high temperatures within rocket nozzles. One strategy is to make the walls of the nozzle thick enough that the surrounding material is capable of absorbing large amounts of heat. The drawback to this strategy is that it requires increasing the mass – and therefore weight – of the nozzle, lowering efficiency.

Another method is called ablative cooling, which uses a material with a very high melting point, such as various carbon fibers, to absorb the excess heat before the material is vaporized and discarded.

The most common method, however, is known as regenerative cooling, which works by flowing the propellant itself through the walls of the nozzle prior to combustion, thereby cooling the nozzle.

Intuitively, it might seem like a smaller nozzle exit would be more effective than wide exit planes at generating thrust. Consider how the pressure of water existing a hose changes if the opening is reduced.

But in reality, rocket nozzles perform better with a wider exit plane—remember that the ratio between this plane and the narrowest point of the nozzle is a key factor in the efficiency of the rocket. It’s this wide-mouthed shape that allows rocket nozzles to achieve supersonic speed.

How rocket nozzles are manufactured

So, how exactly are rocket nozzles made? While there are some new and exciting technologies being developed by institutions such as NASA, the current standard process involves the use of a lathe to shape the nozzle.

While great precision is required when creating the nozzle with the lathe, this is arguably a relatively simple part of the process, with most of the key work taking place in the design phase. This design phase requires considering the nature of the rocket engine needed, the fuel being used and the application for the nozzle (i.e., intended altitude and velocity).

Based on these inputs, the cross-sectional areas and angles of the nozzle can be determined. Amateur or hobbyist rocket builders may use a manual lathe to bore out and shape the nozzle; however, more advanced manufacturers rely on computerized operation to improve precision and reduce human error.

How to make rocket nozzles on a lathe

Manufacturers like AST rely on computer numerical control (CNC) machines, which replace much of the manual work done on traditional lathes. CNC machinists program the design of the components they wish to use and feed the required material into the machine at a specific rate and volume.

Once the initial nozzle is produced, it then goes through more advanced finishing through 3-D surfacing.

What materials are used for rocket nozzles? 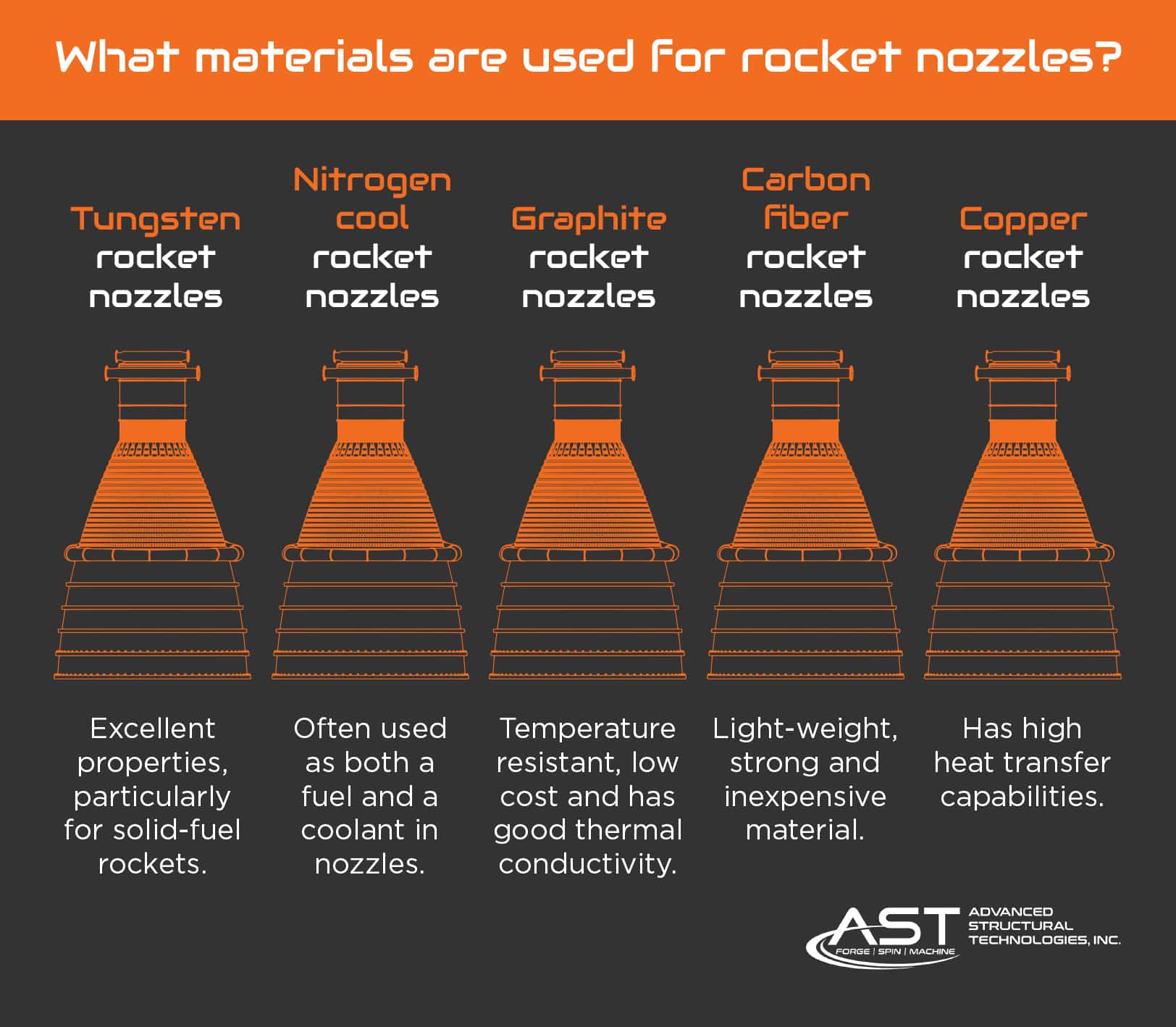 Tungsten is a high-performance metal with some excellent properties, particularly for solid-fuel rockets. Tungsten has a higher melting point than other similar materials, like rhenium. Because tungsten is relatively heavy, it’s often used in combination with lighter materials, the tungsten acting as a heat-resistant coating.

Nitrogen is another common material found in rocket nozzles. Nitrogen isn’t used as part of the nozzle itself, but it’s often used as both a fuel and a coolant in nozzles that employ regenerative cooling.

Graphite – yes the stuff in pencil “lead” – is a widely used component in rocket nozzles due to its many advantageous properties. Graphite is very temperature resistant, low cost and has good thermal conductivity. Interestingly, graphite tends to get tougher at more extreme temperatures as well. Graphite is commonly found in the throats of rocket nozzles.

Graphite rocket nozzles tend to have a very low density, of around 1.8 grams per cubic centimeter. This low density translates into less weight and, therefore, greater efficiency than can be achieved with heavier materials.

Carbon fiber is another category of relatively light-weight, strong and inexpensive materials used in rocket nozzles. There are a variety of different types of carbon fiber materials available, and the specific rocket nozzle application will influence which specific material is used.

Copper is valued in rocket nozzle manufacture for its high heat transfer capabilities. This makes it particularly useful in the thrust chambers of rocket nozzles. There are a variety of copper alloys made by combining copper with other metals, such as titanium, for various properties. 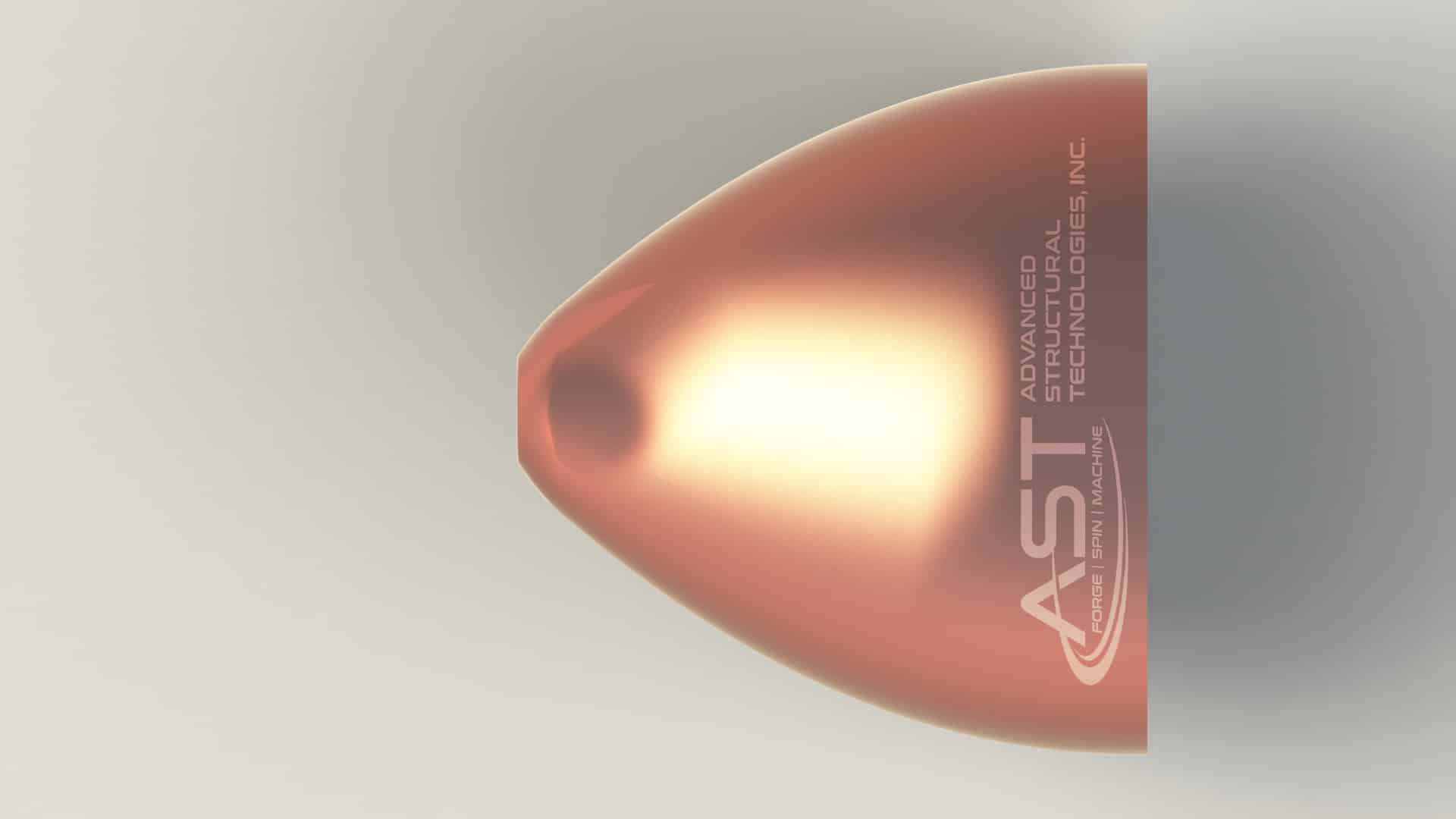 Rocket nozzles are conceptually simple devices, yet their design and manufacture are actually quite complex. This is perhaps not surprising given the crucial importance of achieving even modest marginal efficiencies in the quest to achieve the properties of an ideal nozzle.

There are a number of companies engaged in the design and manufacture of rocket nozzles; however, the critical importance of these components means customers should strive to work with an industry leader, such as AST, where they can source high-performance aerospace forgings. 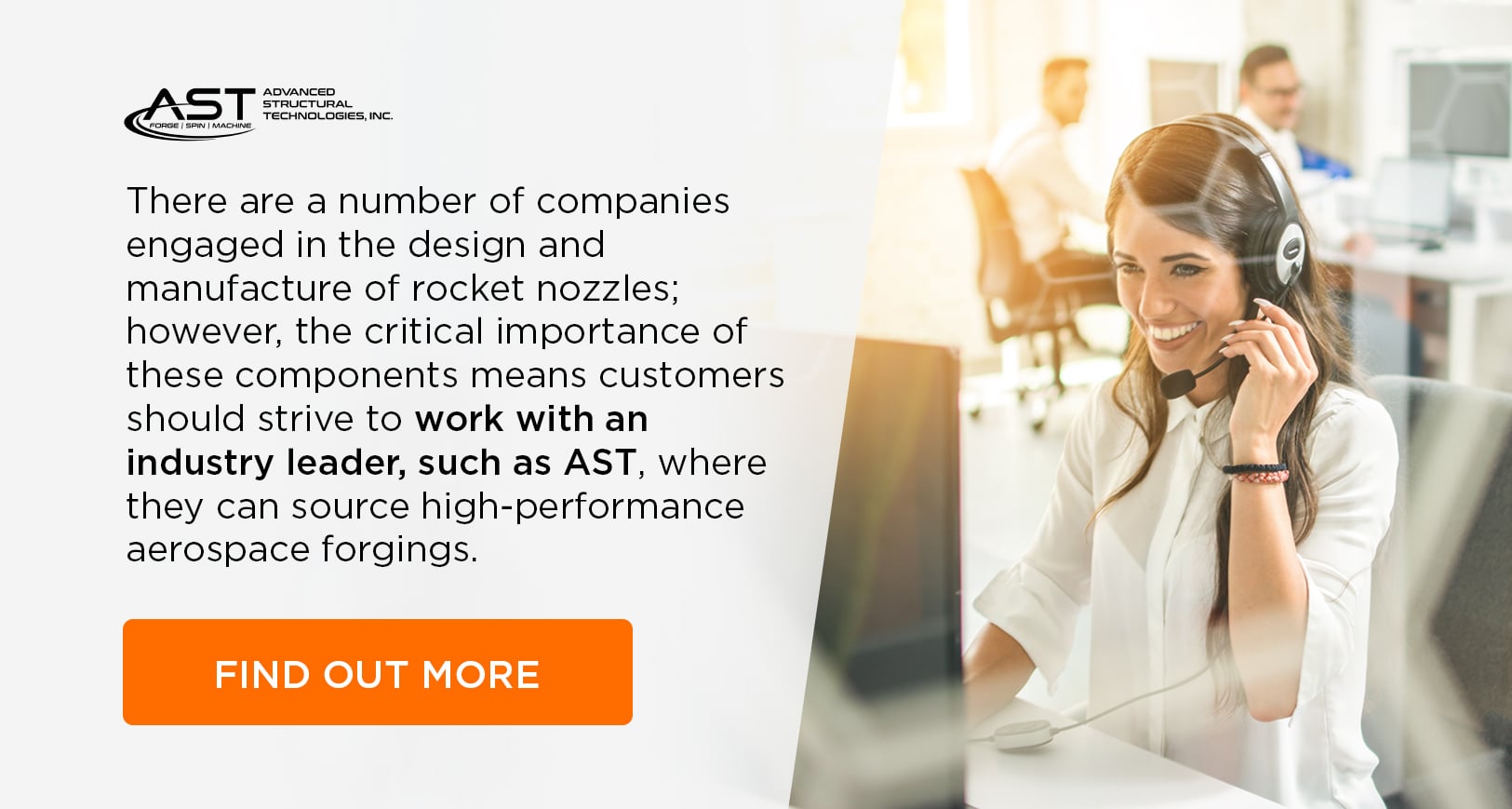