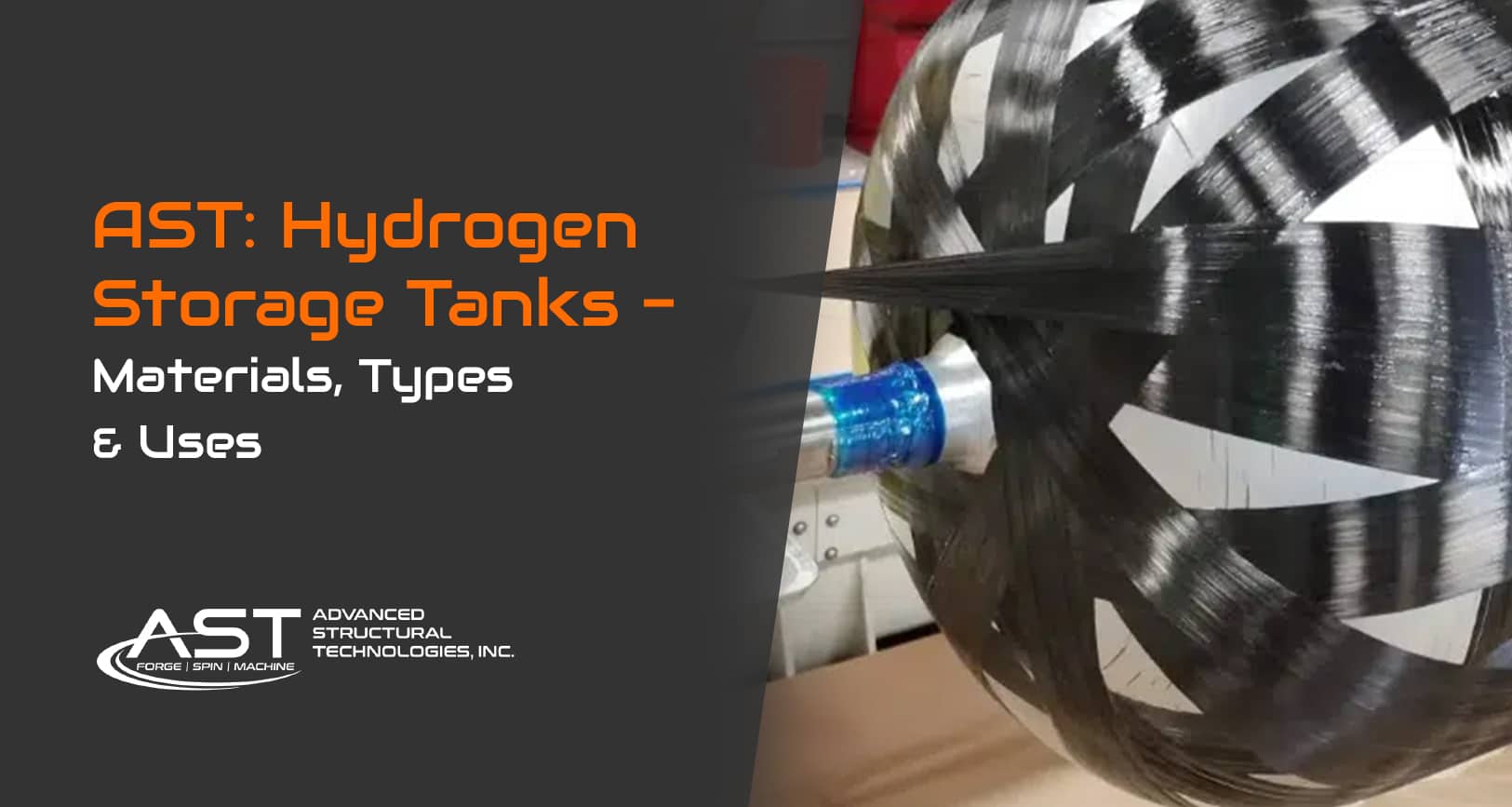 Effective hydrogen storage technology is essential for the continued advancement of all hydrogen and fuel cell-based technologies. This includes stationary and portal power applications as well as transportation. As the fuel with the highest energy per mass, hydrogen holds immense potential for how we power our lives.

However, its low ambient temperature density causes low energy per unit volume. This is why the development of advanced storage methods is of particular interest. The right storage technology methods have the potential for higher energy density, making hydrogen more practical than ever.

That’s why today we’re going to take a look at hydrogen storage tanks, the materials used to build them, the most common designs, and their use cases.

The US Department of Energy calls the effort to achieve safe and practical storage one of the most technically challenging barriers to the widespread adoption of hydrogen-fueled vehicles. As a result, they issued this challenge in 2003 to develop new and innovative ways to better store hydrogen.

Since then, there have been a number of breakthroughs in hydrogen storage.

Although none of these breakthroughs are ready for any form of large-scale adoption, they are poised to change the face of hydrogen storage over the coming decades.

As such, the breakthroughs in hydrogen storage tanks remain the best method to transport hydrogen as they limit the risks of leakage while allowing for bulk transport.

The Hydrogen Market in 2022

According to the International Energy Agency which tracks hydrogen production and demand, the global demand for hydrogen is continuing to grow. From 2019 to 2021, hydrogen demand grew from 91 million tonnes to 94 million tonnes. The IEA reports that this is in part due to key new applications for hydrogen that are showing signs of significant progress. 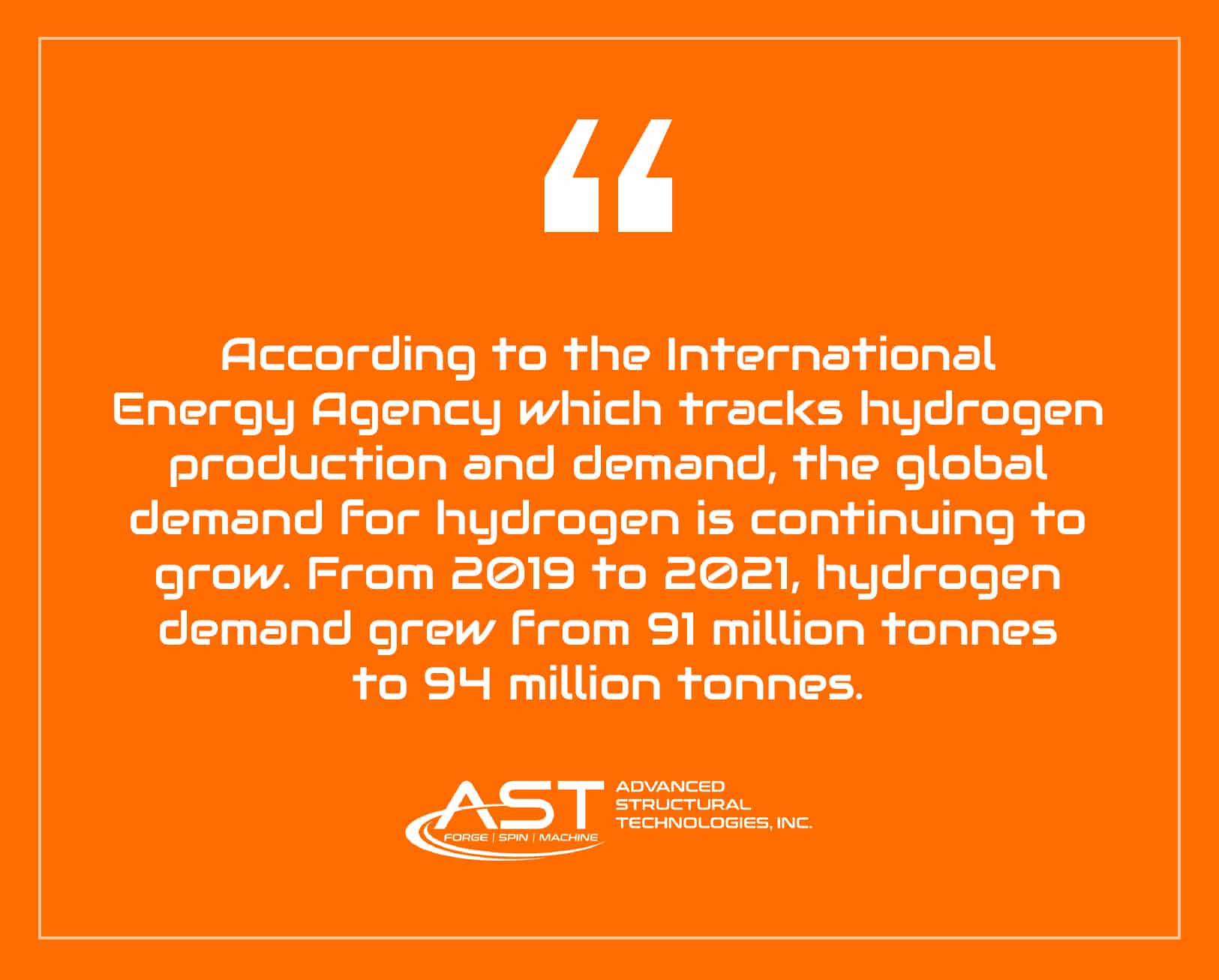 This includes the first fleet of hydrogen fuel cell trains operating in Germany and a push of major companies to secure hydrogen supplies.

By 2030, the demand for hydrogen is expected to grow to 130 million tonnes.

What are Hydrogen Storage Tanks Made Out Of?

Hydrogen gas storage tank material varies depending on their type. As the types progress, more advanced materials are required to accommodate increasing pressure from 175 bar to 1000 bars. 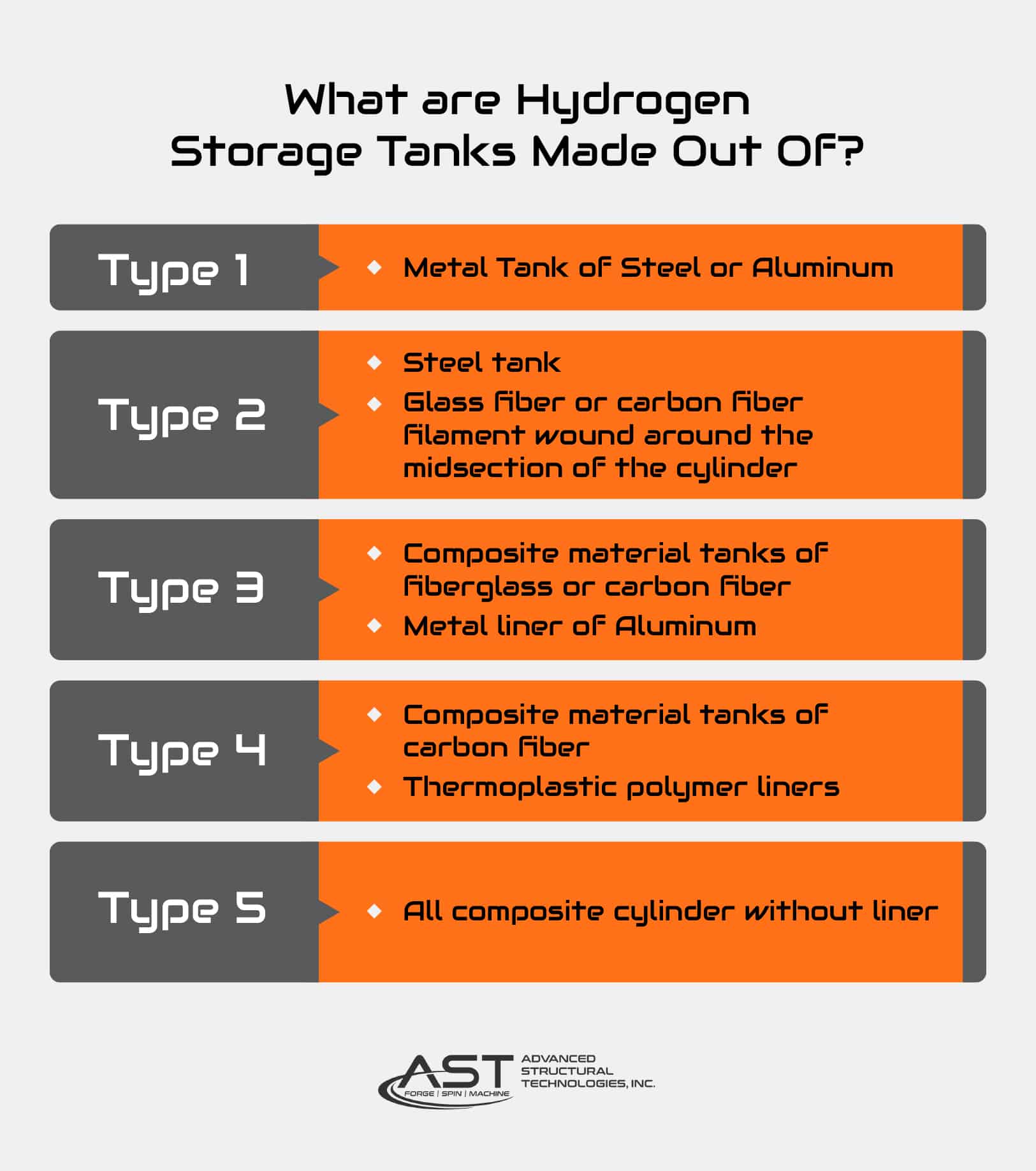 Due to the diversity in the materials found in hydrogen storage tanks, there is some debate over whether to use metal or plastic tanks. However, the bottom line is that metal tanks outperform plastic in terms of usable hydrogen. 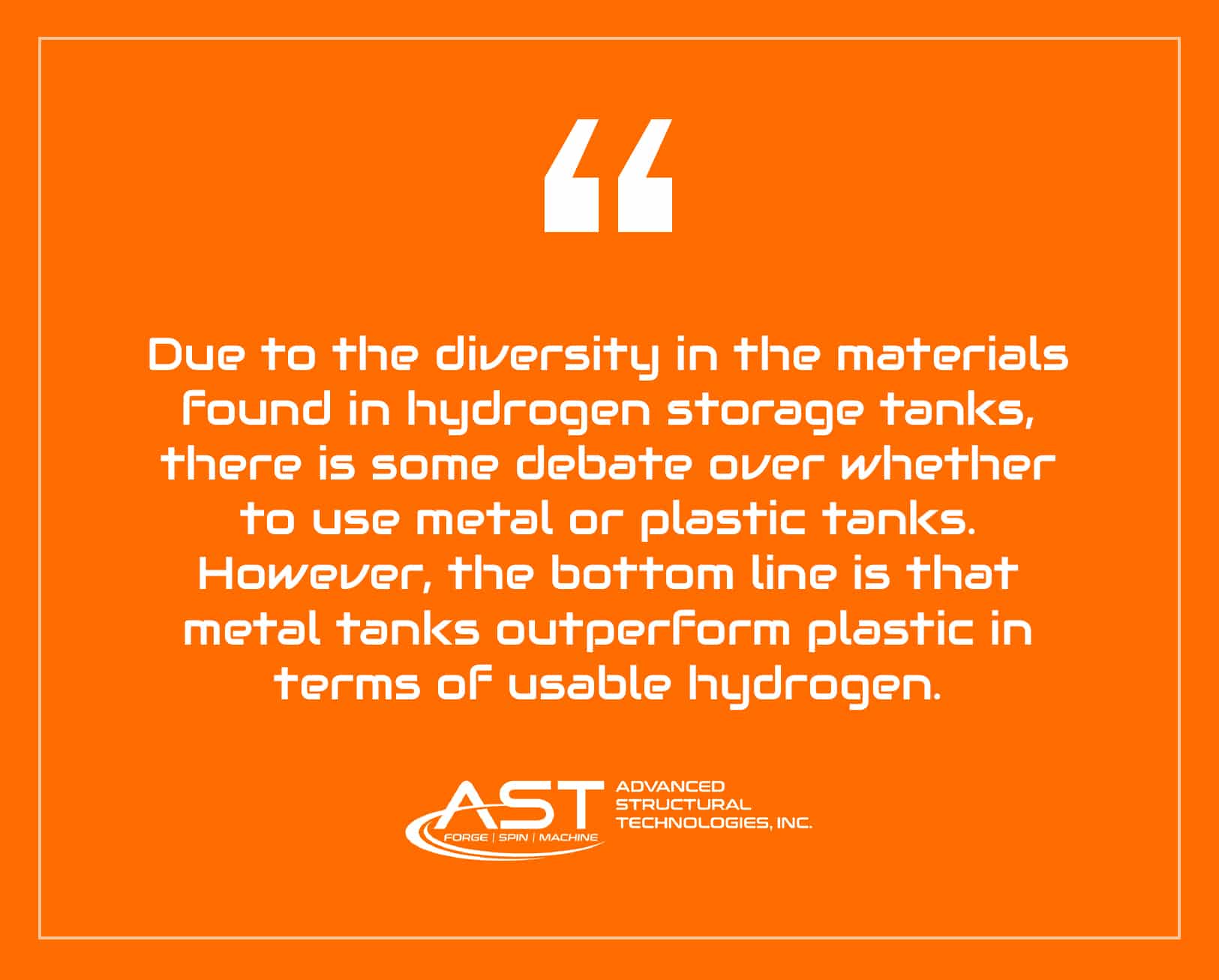 In terms of performance, Type 3 cylinders are superior to Type 4 cylinders. The fill rate for Type 3 and 4 cylinders is the same. However, the difference is that the Type 4 is not able to dissipate the heat generated during the filling process.

These fast-fill operations, therefore, result in a miscalculation of the cylinder’s fuel capacity as the gas molecules expand due to the heat generated by the rapid movement and compression of gas in the tank.

Contrast this with the aluminum liner in Type 3 cylinders. The high thermal conductivity achieves  a more complete fill even during fast fill operations. The tank can accommodate a larger mass of gas significantly improving the driving range, only slightly increasing the vehicle’s gross weight.

What’s more, the Type 3’s cylinder can be emptied completely. This is because the aluminum liner does not buckle or collapse, like an HDPE liner, which significantly improves the actual gas transport volume compared to a Type 4 cylinder. As such, the metal liner of Type 3 means the user gets 95% of the hydrogen from the tank versus the 70%-75% received from plastic.

Design of High-Pressure Tanks for the Storage of Hydrogen

The design process for high-pressure hydrogen tanks begins with defining the general characteristics of the desired purpose. These characteristics include tank capacity, working pressure, material attributes, and safety factors. This information can then in turn be applied to compute other parameters required of the tank’s geometry such as cylinder radius.

From there it is a matter of designing the dome profile. The shape of a composite tank’s dome significantly impacts its mechanical performance. Though the exact shape of the dome is characterized by the definitions of the previous stage, optimum dome shapes are typically quasi-elliptic curves.

Finally, there is the FEA (finite element analysis) of the tank which puts the proposed design through its paces until it is finalized.

Hydrogen gas storage tanks come in a range of psi from 5,000 to 10,000 depending on the type of tank. However, there is some variance.

Again, these PSIs may vary depending on the material and method used to construct them.

The pressure is dependent on the application. There are 7,500 psi Type 1 cylinders for example. The key is that the cylinder is designed for the service pressure it is intended to handle.

Hydrogen storage tanks come in quite a variety. Each is suited for different tasks, but at the end of the day, they serve the same purpose: the safe and effective storage of hydrogen gas.

Type 1’s are typically made of all metal, and therefore the heaviest of the basic hydrogen storage tanks. As such, they are often used for stationary storage.

Type 2’s, meanwhile, are often made of similar metal material as type 1s and the stored hydrogen to cylinder mass ratio is low. However, they often feature some form of wrap and come in much smaller sizes – though still heavy. That is why this type of tank is often to load and refill large hydrogen-fueled vehicles.

AST manufactures the largest diameter Type 3 cylinder that is suitable as the inner vessel for compressed cryogenic on-board fuel storage systems. As such, we are intimately familiar with its design and use. These compressed cryogenic storage systems are comprised of a high-pressure inner vessel of  aluminum liner and carbon fiber overwrap, a multi-layer insulation system, and a metallic outer jacket.

These tanks maximize hydrogen storage density with high pressure and cryogenic temperatures as low as -248 celsius.

The Type 3 hydrogen tank has a remarkably more efficient storage capacity than other tanks such as the type I by upwards of four times. These smaller and lighter cylinders can therefore be used to store the same amount of hydrogen under a maximum pressure of 10,000 PSI (700 Bars).

These tanks come in wrapped composite cylinders and have a metallic lining. However, they are non-load bearing.

As such, these tanks are suited to transport large volumes of hydrogen long distances by road.

The style of Type 4s is reminiscent of the Type 3. They similarly come in fully wrapped composite cylinders. They also store hydrogen under a maximum pressure of 10,000 PSI (700 bars) However, the primary difference is that these cylinders come with a non-metallic lining.

To no surprise, these tanks serve much of the same purposes as the Type 3 in transport and vehicles. However, these are the tanks of choice when a lighter weight is absolutely necessary.

However, as we discussed before, the plastic lining of Type 4 means that only 70-75% of the stored hydrogen can be retrieved compared to Type 3’s 95%.

This approach to hydrogen storage is an attempt to work around the bulky storage containers for hydrogen to make hydrogen fuel more practical. Rather than a cylinder, these tanks can come in many novel shapes and designs to allow the tank to fit in and around the system it is fueling.

This method of storage is currently being explored as a means to make hydrogen-fueled vehicles more practical in day-to-day use.

Conformable hydrogen storage tanks have also many disadvantages and are not yet established in the market. 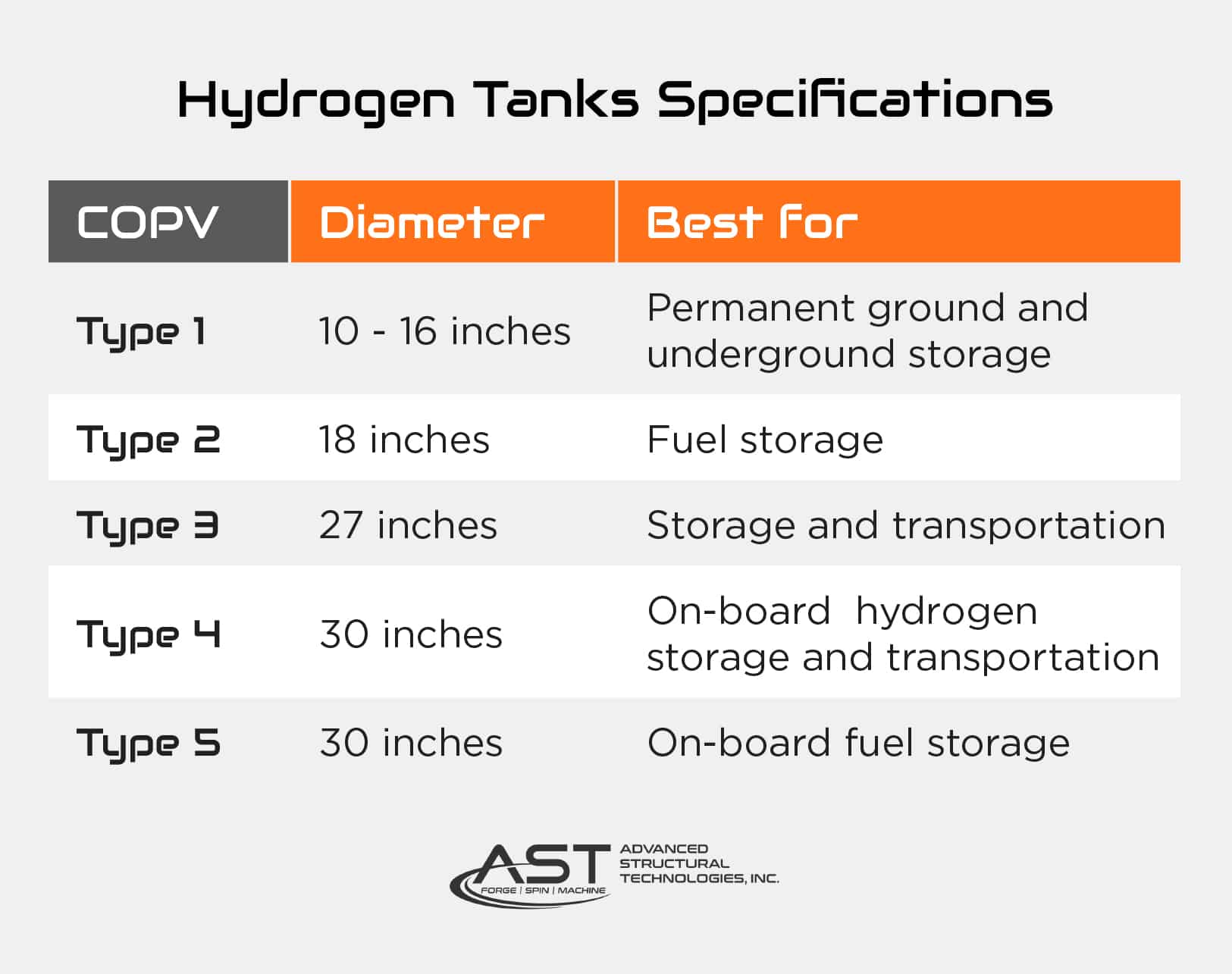 To conquer the challenges that hinder the usage of hydrogen as the primary source of fuel, industry leaders must seek out the most efficient means to store and transport hydrogen.

The large diameter and volume of the AST Type 3 allows for fewer cylinders, valves, PRD’s; thus, minimizing potential leak points due to the reduced number of fittings and connection points.

That means identifying and partnering with manufacturers with the expertise to produce these high-quality pieces of equipment.

Although research is still being conducted on how to make this easier, compressed hydrogen can be transported and stored safely using Type 3 hydrogen storage tanks. Type 3 storage tanks offer quick refueling times, are resistant to high temperatures, and empty without any hydrogen residue. 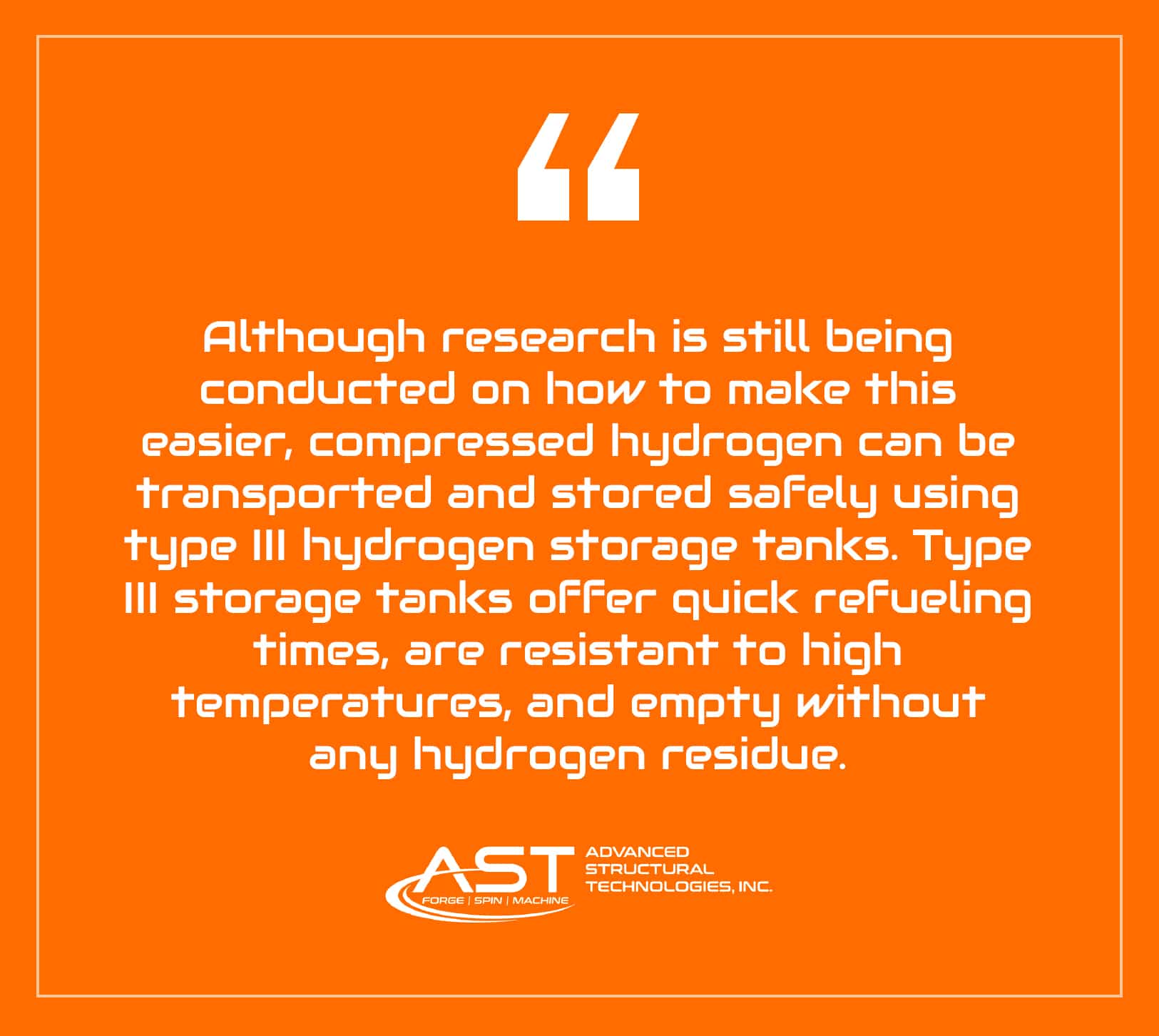 At AST, we manufacture and test the largest-diameter Type 3 hydrogen storage vessels that assure our customers’ safety when storing and transporting compressed hydrogen.

Book a call with one of our representatives to learn more about how AST can help you solve your hydrogen storage and transportation problems. 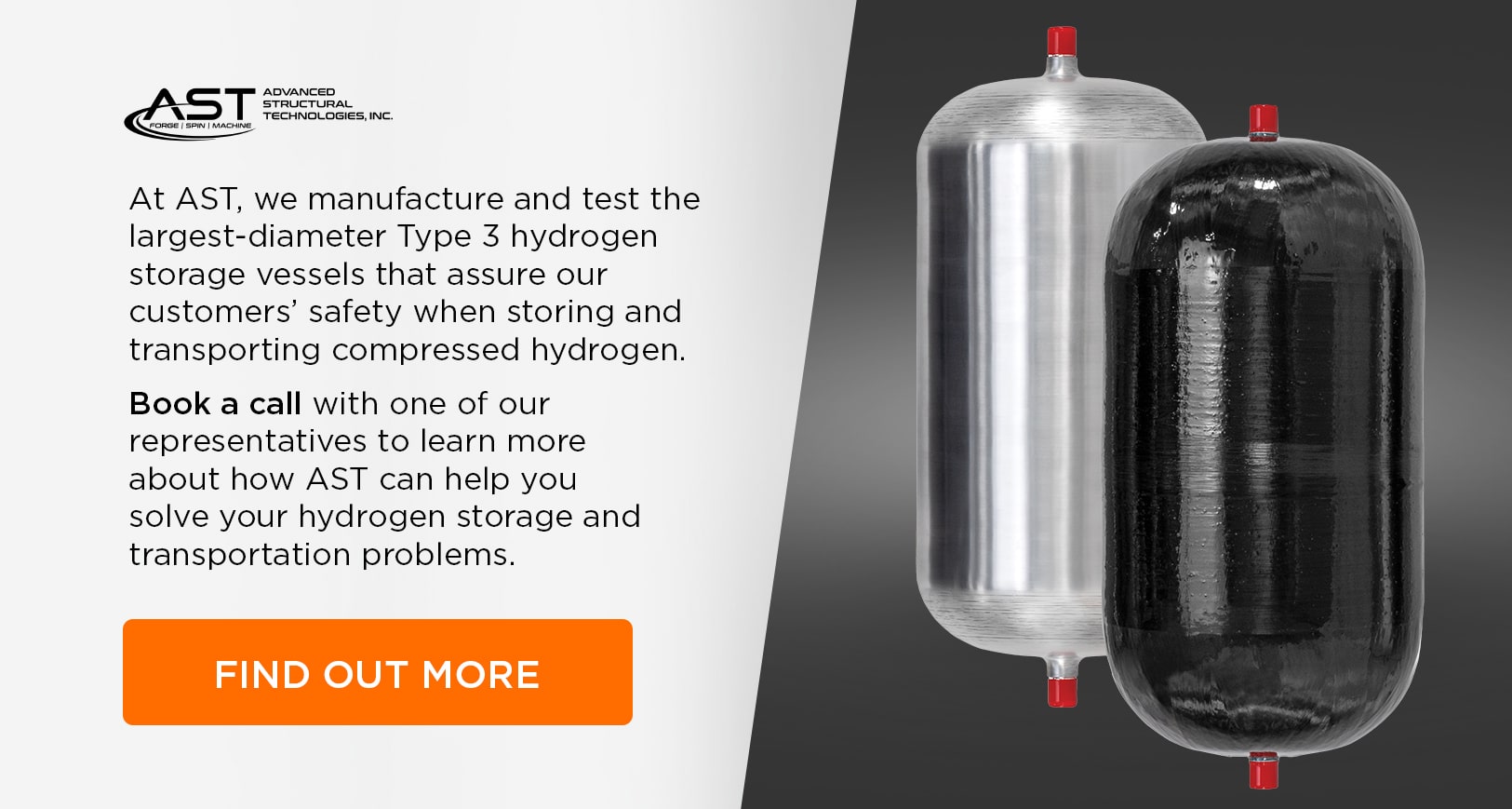